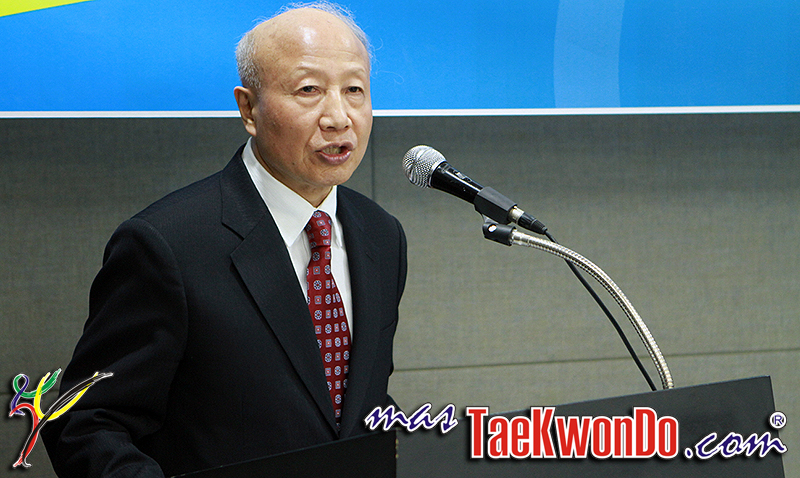 I would like to apologise for not being able to fulfill all of the Taekwondo families dream, which was to see all Taekwondo governing body’s working in cooperation and harmony, served Kukkiwon for about two months as acting president and became the official president on October 27th, by board members unanimity.

I believe that the position of Kukkiwon’s president is the most honourable title for any Taekwondo lover and yet carries a huge responsibility to serve all Taekwondo families.

As I have lived my whole life training and teaching Taekwondo, I accepted the president’s position believing that I would try my best to lead Kukkiwon and successfully carry out many project goals such as the WTA (World Taekwondo Academy), education, training, researching, improving the judging system, organising Poomsae, inventing new Poomsae, marketing, promotion, centralisation of Taekwondo and so on to improve Kukkiwon’s status.

Since 2010, I have served Kukkiwon as a board member at the 1st executive branch when Kukkiwon transformed as a special corporation, and realised that full-time officers such as administration director, chief of training institute and the president are the most important people in Kukkiwon’s operation.

To be an administration director, not only is it important to have a deep knowledge of executive ability but also to have reasonable thoughts, the ability to draw a line between public and private matters and support the president to make the right decisions and therefore to lead Kukkiwon down the right path by prioritising the organisation’s harmony.

However, my hope on this was completely destroyed.

Firstly, when I was still the acting president, some board members ignored the regulations and forced me to hold a management committee to modify the regulations. When I was asked to do this, I told them that according to the documents we would have to wait until the court’s decision was made and if we did not wait, it was against regulations.

Every time I faced this kind of situation, I stood up, not only because of the honourable title I had gained, but because of what I believed was the right thing to do. I was willing to give up my position for this lonely fight.

Thirdly, regarding the executive director and chief of training institute, I have followed the protocol that is stated in regulation’s article 3, which explains that the vice president is to be recommended by the president, appointed by the chairman of the board and report to the board meeting. For this matter, I recommended Soon Myung No, who has several titles from national competitions, has served as the secretary general of Incheon Athletic Association and the president of Incheon Taekwondo Association as an executive director candidate.

The process of appointing the executive director was not easy. The person with the appointive powers recommended a candidate I believed I could not work with to achieve Kukkiwon’s goals. I faced the person with the authority and asked him if he could appoint the person I had recommended for the Kukkiwon’s stabilisation and development, but he refused. As a result, we both agreed to take a step back from what we wanted and consequently, Soon Myung No became executive director.

I was shocked at this issue and felt a heavy moral responsibility.

Forthly, after Soon Myung No’s resignation on December 24th, I tried harder to recommend someone who was most suitable for the position by asking many other Taekwondo professors, presidents of other Taekwondo associations and high-ranked Dan holders to lead Kukkiwon with me. I found the right candidate but the person in charge of appointing, again, did not approve him.

If I cannot choose someone I can work with, I cannot lead Kukkiwon to the right path and for this reason, I chose to resign from the president’s position on December 31st, 2013, as I believe that keeping my position as a president will do no good for the development of Kukkiwon and also my moral belief could not allow it.

I take full responsibility and I have decided to stop being the president for the benefit of Kukkiwon. Solely based on my beliefs, I cannot satisfy all Taekwondo members’ wishes for Kukkiwon’s stabilisation and I could not convince all of the board members myself, so I have resigned.

Some might say that this is an irresponsible decision to avoid my responsibility. I humbly accept those accusations and agree that all of the blame is on me.

However, for the sake of Taekwondo and Kukkiwon’s identity and their pride as a Taekwondo family, I could not in all conscience continue being a president of Kukkiwon. I am truly sorry for that.

The members of Kukkiwon change after their serving period. We all agree that Kukkiwon and Taekwondo must remain highly acclaimed forever by the people of Taekwondo.

To be the president of Kukkiwon is an honourable position. But, I believe that as a Taekwondo person, we must define the identity of Kukkiwon, keep pride as Taekwondo people and devote ourselves to the development of Taekwondo and the increase of Taekwondo practitioners in this time where many other martial arts have become more popular.

Moreover, Kukkiwon’s president must research and devote himself to accept all Taekwondo family members around the world, even if it means to go around the world to express the spirit of Taekwondo and to build diplomacy with other countries.

Again, I am truly sorry for my resignation and I want to give thanks to Moon Jong Hong, a chairman of the board and all others who initially agreed to put me in the president’s position of Kukkiwon.

I would like to say a word to Kukkiwon staff members:

I thank you so much for having faith in me and following me. Please remember that Kukkiwon holds historical and social values at the centre of all Taekwondo and devote yourselves to the development of this great martial art.

I have left the honourable position but that does not mean that I have left Taekwondo. Taekwondo is my life itself. To me, Taekwondo is respect, the right path, righteousness, courtesy, manners and the competition of identity.

Even though I leave Kukkiwon, my walk towards the love of Taekwondo will continue forever.

I will constantly practice the right path, research and educate to develop Taekwondo’s status and walk the path that all other Taekwondo people do.

I will devote myself to do the best for Taekwondo whenever and wherever.

There are many people expressing their sad feelings towards the resignation of Kyu Hyung Lee.

On the other side, there are several new candidates for the empty seats. There are some strong candidates such as Man Soon Jung, the president of Chungbook Taekwondo association for Kukkiwon’s president, Hyun Duek Oh for an executive director, Chul Ho Kim and Hyun Sung Kim for a chief training institute.