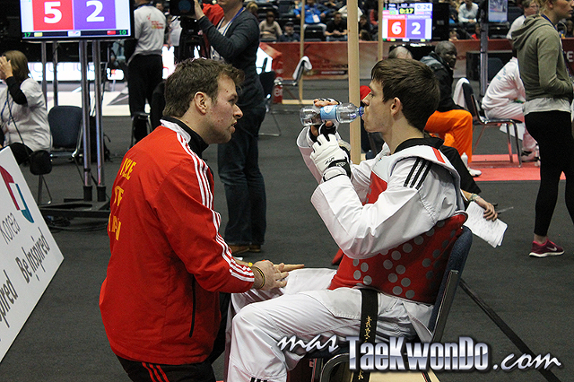 According to bbc,com, Aaron Cook has been known for his controversial overlook for the London Olympics in place of eventual bronze medallist Lutalo Muhammad.

He finished third, behind winner Muhammad at the Manchester Grand Prix last month, but insists he is doing what is right for him.

He told BBC Sport, “I’m enjoying doing it off my own back,”. “My family and I are all doing it by ourselves – I train in a shed in my back garden and we’re the best in the world.”

The fighter switched to representing the Isle of Man in early 2013, stating there was “no-way-back” with the British system while those he holds responsible for his Olympic snub are still working for the programme.

European champion Cook is, however, struggling financially. The Dorset-born athlete admitted to the BBC last year that after losing all eight of his pre-London 2012 sponsors he is now funded almost entirely by his parents – who have ploughed well over £100,000 into his career.

His UK Sport athlete funding was withdrawn after he quit the GB Academy in 2011 and as it stands he would only be eligible for a restoration if he rejoined or entered negotiations with the setup – something he has been reluctant to do.

“I’m happy with what I’m doing, it’s obviously working, I’m up there and showing once again that I’m a top-class player,” stated Cook. “I deserve help that’s the bottom line. I shouldn’t have to change what I’m doing.

He added; “Hopefully someone somewhere along the line will stand up and say this isn’t right.”

GB Taekwondo performance director Gary Hall says he is not against opening talks with Cook’s team, but that compromises would have to be made.

“As I’ve consistently said, our door is always open to any British fighter that has ability, talent and wants to win Olympic medals but there are two sides to every connection,” he told BBC Sport.

“We congratulate Aaron on his performances – we wish him well in the future with the choices that he needs to make.”

Cook competed at the Beijing Olympics in 2008, finishing fifth and is desperate to avenge his London snub with success come Rio 2016.

The World Taekwondo Federation has revealed that fighters ranked in the top-six – come the final Grand Prix event in 2015 – will automatically qualify for the Rio Olympics, it is not known what would happen should two athletes from the same country both attain that rank.

In each past Olympics, since the sport was officially included in the programme at Sydney 2000, only one fighter from each nation has been permitted per weight division.

With Muhammad currently fifth in the -80kg global standings it means the Great Britain selectors could potentially once again face a difficult decision having to choose between the pair – or one of GB‘s other leading athletes including Damon Sansum or Andrew Deer.

“I just have to keep banking top points at all of the Grand Prix events, stay in the top-six and then hopefully get my shot at the Olympics,” said Cook.