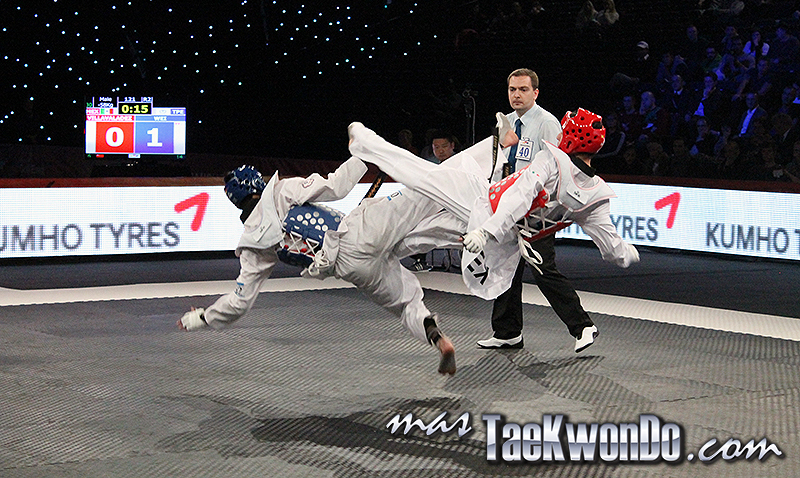 Products of all types to generate adhesion (soft drinks, glue, aerosols, etc. . .) have been tested in the soles of the athletes´ feet to avoid not slipping on the new mats whenever the organization of major events use new mats in a competition, as it is required by the World Taekwondo Federation.   Consequently, we ask a question about this issue:  When are the manufacturers of products approved by the WTF going to make mats with the logical adherence needed to our sport?

Constantly, we hear comments about the little interest showed by the mass media to broadcast Taekwondo championships, but what interest can someone, who is not familiar with our sport, have to see two people struggling to keep the balance not to fall instead of giving a spectacular fight?

Disorganization and disagreements within the Taekwondo have become very usual, and during the recent Grand Prix in Manchester we witnessed another spectacular skating show, not exactly artistic, something that is getting boring to watch in every championship.

The first edition of the Grand Prix was far from being a great professional event as it was merchandized and advertised for so long, and many situations experienced in Manchester were as dark as the black colored new area imposed by the Television broadcaster that generated uncomfortable discussions the previous days to the competition, but that issue will be material for another report.

Going back to the mat issue, they explained to us that the fact that makes the mats slippery when they are new is a material used in the finish at the factory.  It is the finish that makes them slippery.  So, if they already know what causes the problem and everyone agrees that it diminishes the show and the development of a combat, we wonder:  Why don´t they solve the problem so we Taekwondo become a more friendly sport to an average TV watcher?  And consequently improve the fighting conditions to the athletes, who today, are forced to fight in conditions they hate?

12 thoughts on “Taekwondo or skating?”