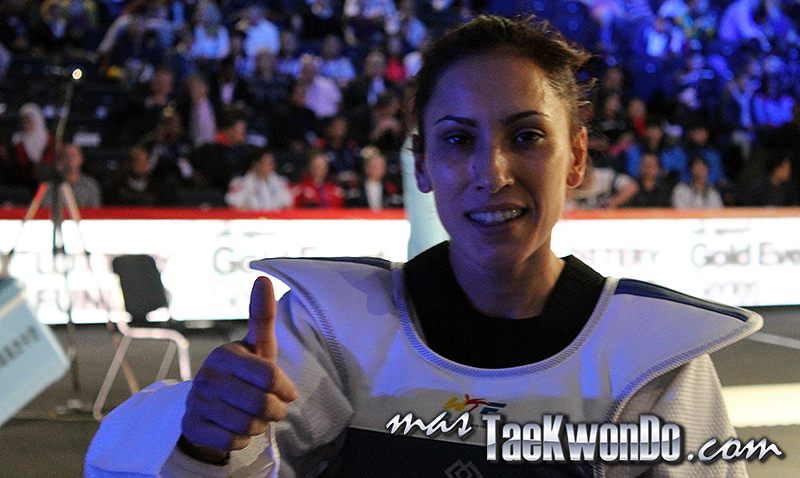 The Grand Prix Final held last weekend in Manchester awarded 80 points to the winner of each weight category, which by the way, were exclusively Olympic categories.  As far as women’s teams are concerned, the maximum award was to Spain thanks to Brigitte and Eva.

Brigitte, baptized by masTaekwondo.com as the “Queen of Taekwondo” thanks to her three World and European championships, and  her Olympic Silver Medal, returned to competition after fifteen months and, as usual in her, she did it reaching  one more title for her collection.

The Mallorcan had major obstacles to get to the top. Brazil, Egypt and China fell under her talent and at the Final, the current World Champion was waiting for her:  Korean Kim So Hui, who had beat Elaia Torrontegui of Spain , Liu Li Ping of China and Yasmina Aziez France.  A spectacular Final showed that experience beat youth by an emphatic 9-1 in favor of Europe.

Meanwhile Eva Calvo did what Brigitte but in the -57 kg weight category in a Final with all the stadium against her, because his opponent was none other than the Olympic champion from Britain, Jade Jones.

In the semifinals, she beat French Floriene Liborio in a combat decided by golden point after a 1-1 draw to reach the final against the London 2012 Champion.

In the decisive match, Eva Calvo beat Jade Jones 4-1 to win the second gold of the Spanish team in the Manchester Grand Prix and thus close the Spanish participation in the top of the podium for the women’s teams.

Two athletes from the same team, ten years of difference in age.  Their performances showed us that the “cracks” as Brigitte are stainless and return anytime to show their incredible talent. And, on the other hand, the generational change and youth, as the case of Eva Calvo, are also fundamental to teams that want to remain in the top.