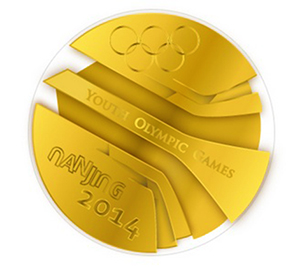 After an online contest held since September of this year, a prestigious jury designated by the IOC selected the winning design.

Matej Cicka, a young Slovakian only 22 years old was the big winner of this contest, followed by another Slovak, and a Spanish got the third place.

The concept that the young designer wanted to convey is called “the road of the winners” and was chosen from more than 300 designs from more than 50 countries. The IOC jury described it as modern, fresh and dynamic.

Speaking of his victory, the 22- year-old said : “to enter this competition was one of the my school´s homework, so I drew many sketches and talked to the teacher to choose the best , I was inspired by the athletes , which, in my opinion, are basis of the youth Olympic Games . So I included in my concept and used different styles to represent the victory of the athletes on the podium and finally I called it “the road of the winners”

The winner of this contest gets as a prize a trip to the Games and tickets to the opening and closing ceremonies and a complete set of the medals designed by him.