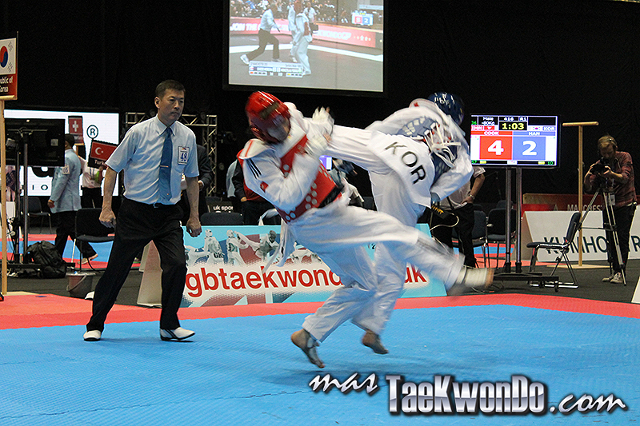 According to koreatimes.co.kr, Korea’s haul of three silvers and a bronze is considered its worst performance ever in a major international event. It’s hard to dispute that Korea has come a long way in globalizing its mixed-martial art, taekwondo. For one thing, its athletes are no longer able to dominate international tournaments as they did for decades.

On the final day, Puebla World Championship gold medalists Lee Dae-hoon and Kim So-hui failed to make it to the semifinals in the men’s 68-kilogram and women’s under-57-kilogram divisions, respectively.

At the 2012 London Olympics, Lee defeated Russia’s Alexey Denisenko on his way to winning a silver medal. At Manchester, Denisenko tasted revenge, overwhelming Lee for an 8-5 win in the quarterfinals. The Russian defeated Canada’s Maxime Potvin in the final to take the gold.

Kim fell short of her rival and London Olympic silver medalist Yuzhuo Hou of China 3-1 in the quarterfinals, hurting herself with misplaced kicks and several mental lapses.

Spain’s Eva Calvo Gomez won the gold after overcoming a stiff challenge from Britain’s Jade Jones, who reached the final after beating Hou in the semifinals.

Korea came after Taiwan, which earned one gold and one silver, and Sweden with one gold.

At the event where 231 athletes from 59 nations participated, 14 Koreans competed in five different weight categories.

The annual event was designed to give opportunities to athletes around the world to compete between the Olympics and World Championships. The results of the Grand Prix are factored into ranking them.

Koreans’ poor showing at the contest swept aside concerns that their performance is way too dominant, but is expected to generate calls for some of the coaches involved to be held accountable.