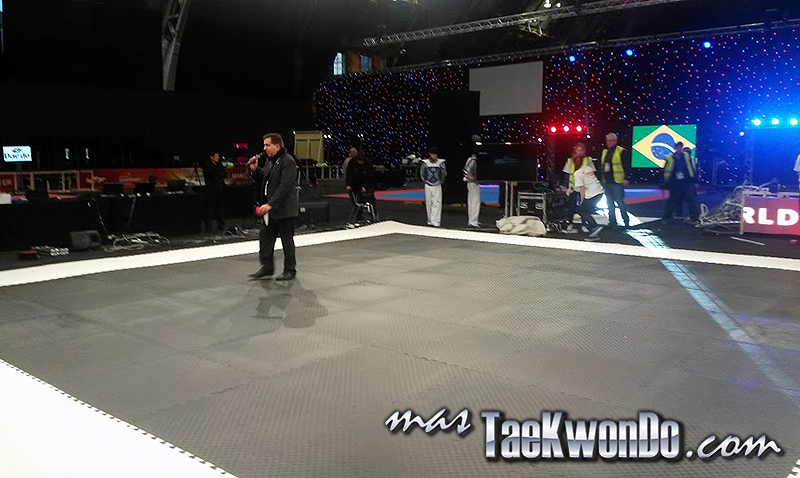 Among the changes in the competition rules, it is important to mention that referees, previous to make penalty, usually ask time to the Central Judge using the Shi-jan sign.  During the Grand Prix, after the Kalió, the Central Judge must immediately stop the chronometer and the referee will only give the penalty.

Additionally, to avoid athletes faking an injury to gain time, the referee must make sure that the athlete is really injured to allow the doctor see the athlete.  If the athlete is just suffering pain, the referee will not allow calling the doctor.  He will count up to six (6) and ask the athlete to stand up and continue the fight.   Doctors will be allowed to see the athlete only if she/he has suffered an obvious injury; these measures are taken to expedite the process of combat.

Regarding the White and Black “mats, this new measure to be implemented in this Grand Prix is only with television purposes. According to the BBC (the network responsible for the broadcasting of this Final GP 2013) , the black and white mats are intended to further highlighting the doboks .

The argument is that viewers will have a better visibility and feel more attracted to watch the performances.  In this regard, Jean Marie Ayer, WTF Secretary General said: “In each new event we try to give a step forward without losing our identity. We try to improve Taekwondo for the benefit of all the Taekwondo community. The commonly used colors are those in the WTF logo, red, black and white, as you can see in the GP logo.  For Rio Olympics, green may be included. We will see. “

MasTaekwondo.com had access to information stating that they wanted to include “yellow” but finally it was determined not to include it because there were too many changes; red and blue will continue to be used in three areas and black and white in the area where the TV broadcasting will take place.