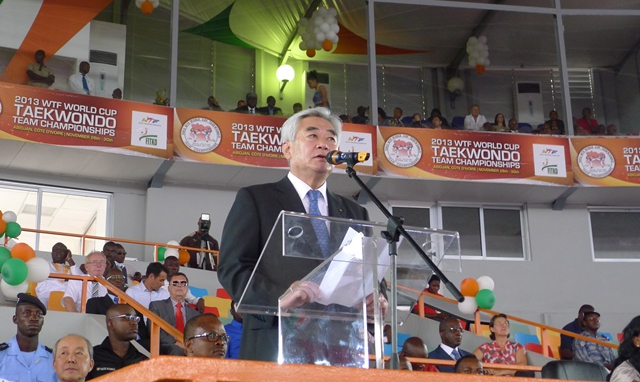 According to insidethegames.biz, the World Cup Taekwondo Team Championships opened in Abidjan today, with more than 170 athletes from 15 nations gearing up for the competition in the Ivory Coast capital. Teams from Brazil, China, France, South Korea, Mexico, Russia, Spain and the United States are among those looking to take on the hosts and stake their claim as the world’s best during the three-day event at the Palais des Sports arena.

Abidjan will also welcome representatives from much closer to home with Burkina Faso, Democratic Republic of the Congo, Gabon, Mali, Nigeria and Senegal all sending a contingent to the Championships. Athletes and delegates alike will have arrived in the city feeling a huge sense of relief following the event’s rather disruptive build up.

It was originally due to be held in Dakar, Senegal but the African nation was forced to withdraw from their duties as host leaving Gabon to pick up the mantle. After further investigations into Gabon, the country failed to meet the World Taekwondo Federation‘s (WTF) requirements, leaving no choice but to change the venue of the Championships yet again.

Following a meeting in Lausanne, Switzerland last June, the WTF finally handed the event over to Abidjan, which now becomes the first African country to host the tournament. gives me great pleasure to be here in Abidjan for the 2013 WTF World Cup Taekwondo Team Championships,” WTF President Chungwon Choue said.

“Taekwondo has a very special relationship with Africa and we are delighted to be able to reward the loyal support here.

“The growth of taekwondo in Africa over the last two decades has been extraordinary; the WTF now has 49 African Member National Associations.

“Speaking to athletes and spectators it is clear to see the appetite and passion for taekwondo that exists in Africa.

“Just yesterday afternoon, a ceremony was held to commemorate the laying of the first stone of the Taekwondo Palace which will serve as a base for the development of taekwondo in the Ivory Coast for many years to come.

“Hosting world-class competitions like the WTF World Cup Taekwondo Team Championships across the world will only increase the global reach of our sport.

“I have no doubt that over the next three days Abidjan will host an excellent event which will be contested in the spirit of friendship and fair play.”