After the article published by masTaekwondo.com referring to the current conflicts in the election  process of the Executive Committee of the most important Union, as far as our sport is concerned, (See Note) masTaekwondo.com wanted inform you with more detail about the elections that will take place Muju , South Korea on November 28.

MasTaekwondo.com was in Bali, Indonesia during the WTF Council Meeting, and although there was a previous established agenda, one of the main issues that caught the attention of everyone was the elections in Asia.

There is a lot of general speculation about the power that Unions like the European, the African or even the American Unions have, but the power is minimal compared to the power of the Asian Taekwondo Union represents.  That is why the WTF is concerned.

A few weeks ago, a series of mails stating to represent the Arab Taekwondo Union, a very important organization within the Asian Continent, were circulating.  Presumably, these mails originated from the e-mail account of the president of this organization, General Ahmed Fouly, in detriment of the candidate for president of ATU, Professor Lee Seok Kyu.

MasTaekwondo.com talked directly to General Fouly to have a better picture of this situation. 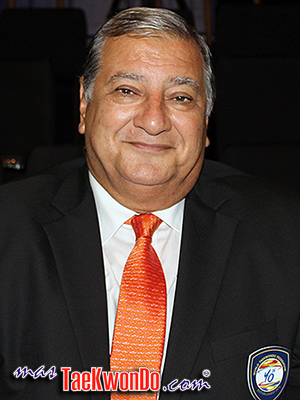 We understand that some e-mails on behalf of the Arab Taekwondo Union have been sent to discredit or support certain candidates running for president of ATU.  Can you tell us what this is all about?

Sure, it is true that these mails were sent, but it is completely false that we did it because it is against the election rules. As president of the Arab Union, which is made up of 25 countries, we are totally against such rumors and accusations. We have not given any official statement yet as we think it is more ethical in these cases to be discrete. The vote is secret so we respect that.

It is impossible that we publicly support or discredit one or the other candidate.  That is unethical.

None of us have tried to influence anyone to vote for anyone in particular, assuming that all candidates running are our friends. Each country may choose the candidate they please without being influenced by anyone.

That is why I talked to my Secretary General in Egypt just after I learned about these emails, and asked him to send an e-mail on my behalf to all WTF members stating that we are not against anyone and we just want the best for ATU.

How do you think these emails were sent?

Through tricks and the bad habit of accessing other people´s e-mails accounts. This happens everywhere, but I had not seen it in Taekwondo. All candidates are my friends and if they win or lose, the friendship will remain.

Could you tell us whom exactly these emails were discrediting?

These emails mentioned that we were against Professor Lee Seok Kyu, it also stated that General Fouly was contacting all Arab countries to get support for this candidate or discrediting the other one.

Professor Lee has been my friend for a long time; Mr. Dai Soon Lee is my teacher, I respect him a lot, he is very wise, he knows that all these mails are completely fake.  He knows he is like my brother and we have been colleagues in the WTF Council for several years.

What do you think will happen in this election?

(Laughs) No one knows! All candidates are excellent, the best.  I know three of them, Mr. Seyed Mohammad Pouladgar from Iran, Mr.  Lee Kyu Seok from Korea and Mr. Milan Kwee from Singapore. They are all my friends.  The objective of my fellow friends of the Arab Union is to look for the benefit of Taekwondo in Asia. That doesn´t mean that anyone who loses this election is bad; that´s not it at all.  Only one can win, that´s it.

The winner will be elected by the Asian Union, because they support him and they wanted him to be the president.  The winner will also count on Dr. Chungwon Chue and the WTF´s support.

Well, thank you very much for the opportunity to express myself through masTaekwondo.com.   I always follow you and I know you have influence on the international Taekwondo, so I decided to discuss this with you to clarify this delicate situation.