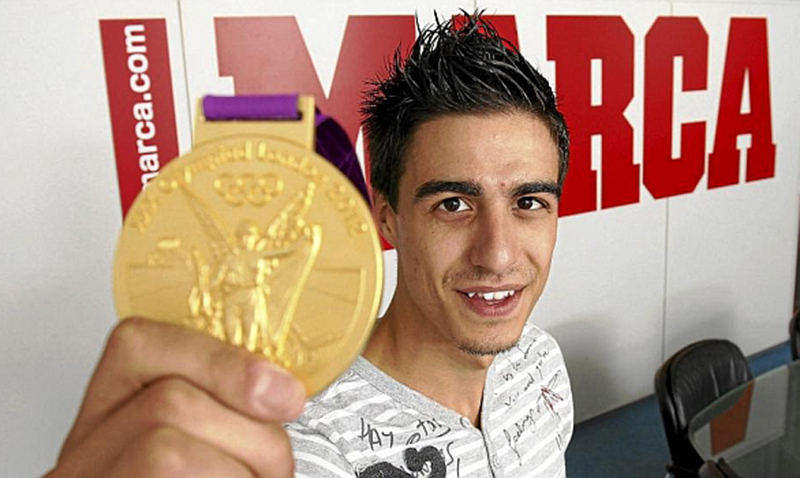 First was the defeat of Madrid 2020 and then a serious knee injury. Everything hurts, but Joel Gonzalez (Figueras, 1989) doesn´t cry over spilled milk.   Spain may find in this Olympic Champion, the example to overcome anything.

How is the bitter side of sports?

Emotionally is a blow. In the International Open Championship held in Alicante I partially injured my knee.  We were preparing for the World Championships as it was just two months ahead, however my knee was completely injured this time.   I paid the price.   We tried to avoid surgery, but I think it will be unavoidable. Recovery will take five to eight months.

What positive side can be extracted from this injury?

I want to come back and be the one I´ve always been.  We will have to work double in recovery. Going up to the 68 kg category, I would be able to gain a more consistent muscle mass without losing speed. I have the opportunity to go one year to Australia or the United States-now is closer to Melbourne, a Masters in criminology. The CSD (the main governing body in sports in Spain) has helped me a lot on this issue. I want to thank Miguel Cardenal and Olympic committees of these countries for this opportunity.

I really want to be in other Games and fight for the top positions, but now I must stop. Competing in a new weight category is a personal challenge. In 58 kg had won everything: the two World Cups, two European, the Olympic Games … I wanted to take me off the pressure of being forced to repeat it in 58. I see myself being able to go back to being the best in 68 kg. I do not know if I’ll get it or not, but I will give everything.  Additionally, last year it was difficult for me be in the 58 kg category.

Now the qualifications for the Olympics are according to the WTF Olympic rankings.  How does it affect the athletes?

In my particular case, I’m second in the ranking, but with the injury I´m sure I will lose two or three positions. In general, I hope that the Spanish Federation make an effort to go to the Grand Prix Series in order to get the Olympic places. It is not the same to bring three athletes than to bring eight athletes. The chances of medals, of course, would increase a lot.

If the medals are the target for the Olympic enterprise, it seems that the recipe is clear: invest in Taekwondo and Canoeing.

It’s true what you say. Taekwondo is a bet almost certain. They have to invest to qualify the maximum number of competitors and the success will come. The results are there, at the last World Cup and London 2012. It is about keeping a winning mindset. If one of us is fourth, he/she gets angry and frustrated;   being fourth is the worst that can happen. That example is what this country needs. Before leaving Spain we give all to be the best here, because the level there is excellent. When you go abroad, you realize you can get anything.

How long does the “boom” in popularity last after being Olympic champion?

Two months or so (laughs). To me it is exciting when someone I do not know tells me how he got excited when we won the medals.  A lot of people like sports, I don´t mean football, which is more of a show and I like it, too. However, I think there has to be changes in what they sell. It is clear that we cannot compete with footballl, but people are starting to get tired of it.  I´m not suggesting to broadcast Taekwondo every day, but it explains that the Games are not every four years… there are World Championships, there are European Championships… All athletes from all sports train six hours a day. In the end it is unfair that just before the Games they come to you and take for granted a medal.  If you get it, it won´t be for sure due to the support or the follow up, will it?

Flag Bearer of Madrid 2020, how was the day of the election?

It was a big blow; I have very distressing images recorded in the memory. I was at a table with Pau Gasol, Felipe Reyes, Ona Carbonell, Natalia Golding and Teresa Perales. The silence was brutal. We looked at each other after the tie, but no one said anything. When the blow came, expected after the tie, maybe I was a little selfish because, for a moment, I thought about me and my sport, but in general the Spanish sports base depended on this. That silence was eternal for me, for all that Madrid 2020 could have been. Pau was the first to speak, all was over. We did not want to leave the room in an hour or so because we were afraid to say something that we could later regret.

It is sad to be speaking about this after the election of the 2020 Games. But a sheikh, aristocrats, lobbyists … Where is the sport?

Money is very important, that is clear. The austere proposal of Madrid was consistent with reality; Tokyo´s proposal, sparing no expenses, convinced the IOC members.  It seems that they prefer to stay in a five-star hotel in Tokyo than come to Madrid. I don´t know. Madrid was the strongest candidate, with the support of all the Spanish people and we thought that it was possible. Tokyo was a very strong candidate as well. In the end, money won to feelings.

Let´s continue.  Match fixing, doping… what we must do to restore faith in sports?

Working in grassroots in all sports, in any discipline. When I started in Taekwondo, they didn´t teach me that respect was important.  They taught me that respect was the most, most, most, important value. Power and money is a bad combination and they almost always come together. But tomorrow it will be our generation that will run this country and that’s when we really have to enact these values.

How do you imagine yourself now if you had followed your promising career in football?

I don´t know.  I can tell you, coming from soccer to taekwondo, when I complained about a low kick, they instantly said: “Don´t complain.  Respect!”.   That was a fundamental learning for me. In the end, the boy who plays football is the least guilty. If their own parents instill a hostile environment and inconsiderate insults then we will see inappropriate behavior and bad practices when they become adults.