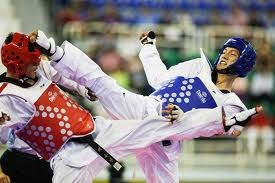 Almost 400 Taekwondo martial artists from 37 clubs nationwide are competing for the RoK Ambassador’s Cup in Hanoi , which kicked off on November 18.

The tournament was organised by the Korean Culture Centre in Vietnam in conjunction with the Vietnam Taekwondo Federation and the municipal Department of Culture, Sports and Tourism.

Athletes will compete in 40 combat categories and 16 performance categories for two age groups, from 13-16 years old and from 17 years old.

The event, which will run until November 21, is considered a good chance for Vietnamese Taekwondo athletes to prepare for upcoming international events including the Youth Olympic Games 2014, Asian Games 2019, SEA Games 2013 and Asiad 2014.