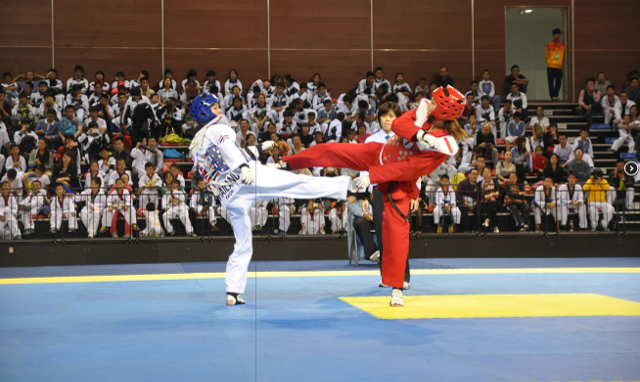 According to the official WTF website Asia went into the one-day intercontinental championships, which took place at the Shen Zhen Sports School, as reigning champions having defeated Europe 13-3 at the inaugural Europe-Asia Intercontinental Taekwondo Championships in Moscow, Russia last year.

The eight individual Olympic-weight matches, consisting of four male and four female matches, were held in the morning with one point awarded to the continent for each individual victory.

In the afternoon, six team competitions took place. The team competition was conducted in a five-on-five tag-team match format with each of the men and women’s teams limited to a combined weight of 360kg 305kg respectively.

The team competition was composed of two five-minute rounds with a one-minute break. In the first five-minute round, each of the five athletes fought for one minute while the second round was a tag-team match in which athletes could be replaced at any time after making three attacks.

In the opening team match between the European men’s team and the Asian men’s Team B, the five-member Asian squad won the match 26-16.

In the following match between the European-Asian men’s team and the Asian men’s Team A, the two teams tied 8-8.

Around 250 young Chinese taekwondo students watched the championships, demonstrating the popularity of taekwondo in China.