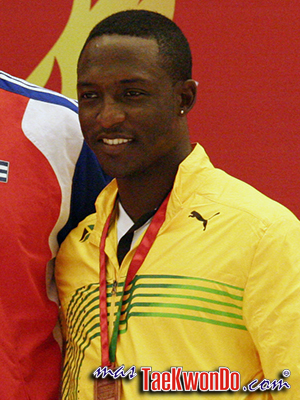 The Jamaican Taekwondo athlete, Kenneth Edwards, failed a doping test conducted by the World Anti-Doping Agency. The banned substance found was a diuretic.

Edwards qualified for the London Olympics in the continental qualifying tournament in Queretaro, after defeating the Venezuelan Juan Diaz in the Heavy division.  (See results)

Kenneth Edwards said last month he was notified that he tested positive for a banned diuretic and that he is awaiting the results of a second test. Diuretics lighten body fluids and can be used to hide drug use.

The athlete who in 2010 became Champion in the XXI Central American and Caribbean Games (See results)  has not competed for the last three months.

“I am committed to my work as a professional athlete and I haven´t done anything to jeopardize that position,” he said in a statement. “I am determined to face the results”.

The announcement was issued at the time that the World Anti-Doping Agency began an audit to the Jamaican Agency due to inconsistent results. WADA officials hope to visit the Caribbean island late this year or early 2014.