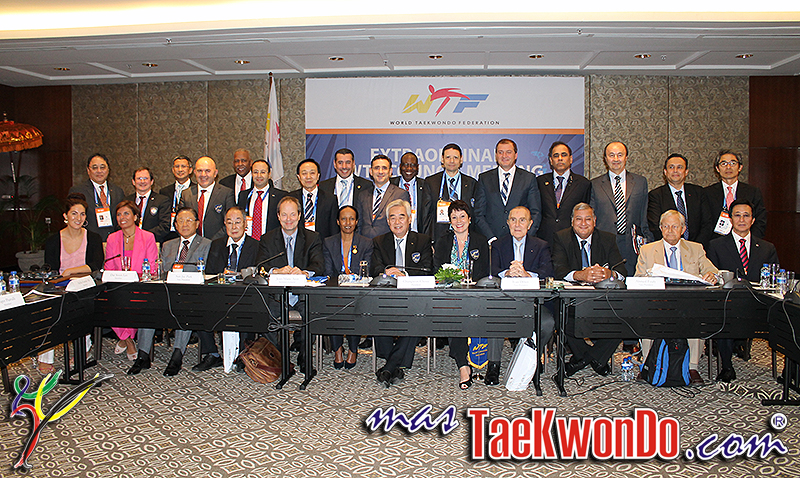 The WTF Executive Council extraordinary meeting began at 10 am with Dr. Choue´s welcoming speech and thanking everyone for their participation and encouraged them to work together for the development of Taekwondo in the next four- year term.

Additional to the new appointment announcement, it was discussed the progress of the relationship between WTF and ITF.

The WTF Council also discussed the development and marketing for the Grand Prix and analyzed the bids presented by Russia, UK, China and Mexico to host this event in the near future.

Each WTF Council Member had a three-minute presentation in which they gave their suggestions or proposals on how to contribute to the development of Taekwondo around the world.   It call our attention the suggestion presented by Mr. Park, Italy, in which he urged the approval of the head protector urgently.  Additionally, Ms. Maria Borello, Guatemala, presented the different programs she has developed in that country covering different areas in the society (Kicking Cancer, Down syndrome, school and Rehabilitation Programs; she has strengthened relationships with the IOC through Mr.  Willi Kaltschmitt, OIC Executive Member , with the Korean Ambassador in Guatemala through the  Korean Ambassador Cup, with the National Olympic Committee, and with FADO, a foundation sponsored by commercial and finance private companies).

At the Council meeting, WTF President Choue reported that the International Paralympic Committee (IPC) decided at its recent Executive Board meeting to grant the WTF an IPC-recognized IF status. Accordingly the WTF is allowed to participate as an observer in the IPC General Assembly and other conferences.

In a related development, on 26 October in St. Petersburg, Russia, WTF President Choue met with the president of the International Committee for the Deaf, or ICSD, to sign a memorandum of understanding on mutual cooperation. Under the pact, taekwondo competitions for deaf athletes will be newly included at the 2014 World Para-Taekwondo Championships at the earliest.  See: WTF Signs MoU with ICSD to Promote Deaf-Taekwondo.

The Council members unanimously approved a proposal by WTF auditor Mr. Dalibor Krpan of Croatia to set up a WTF-designated regional training center in the Biograd beach region in Croatia.

As recently as 18 October, while in St. Petersburg, Russia on the occasion of the 2013 SportAccord World Combat Games, WTF President Choue met with Russian Sport Minister Vitaly Mutko to agree in principle to set up a WTF-designated regional training center in Russia.

The final issued approved by the WTF Council was that their next meeting will be held in Taiwan on the occasion of the World Youth Championship. 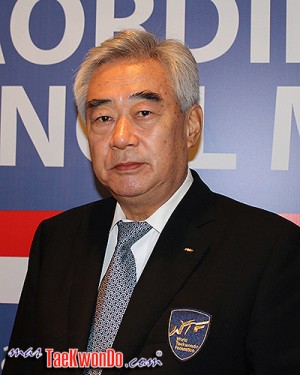 MasTaekwondo.com talked exclusively with Dr.Chue, just after the meeting, and he told us:

“All the WTF Council Members, the new ones and the old ones, made their presentations of their contribution to Taekwondo for the future, so we will pay attention to what they said very carefully. We will try to follow all their suggestions.   I think the future of the WTF will be bright, very promising. Each WTF Council Member is very happy after Taekwondo was confirmed as a core sport for the 2020 Olympic Games, which is wonderful.  Also on the occasion of this the 8th World Poomsae Championships which will be the most successful , the  Taekwondo Aerobics will be introduced and I am sure the public will like it. “

When asked about his expectations for his Council for this four-term period, he said:  “I think they are a great group of people, the most productive and they love Taekwondo, so I consider that a great future is waiting for us.”

On the night of October 29, the WTF offered a welcome dinner for all WTF Council Members and the group of referees that are working in Bali during these championships.

Today (October 30) the WTF will celebrate its 40th Anniversary with a special dinner.