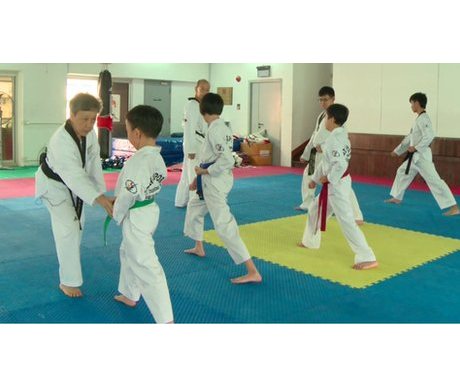 When she was much younger, Linda Sim wanted to join the army, but was told she was too small.

“Next I thought I could be a policewoman – to protect people,” she says, but she didn’t make the weight requirements for the police force, either.

Instead, she discovered taekwondo in 1971, and it seemed to fulfil her need to help other people. “If I had a black belt I thought I could be a bodyguard and protect somebody.” Within a few years, she achieved just that.

Though the sport gave her great mental strength, she didn’t find a practical use for her martial art for more than three decades.

Much to the chagrin of her parents, Sim met the Franciscan Missionaries of the Divine Motherhood, and decided to join them by becoming a Catholic nun.

“Being the only daughter, my mum was very upset when I said I would give my life to God and be a missionary,” she says. Her parents had hoped she would provide them with grandchildren.

Since the group’s headquarters were on the other side of the world in Britain, she would disappoint them further by leaving Singapore.

“I spent 17 years in England and three more in Africa, where I ran a hospital in Zimbabwe,” she says.

During her absence, a relationship developed between the Singapore Taekwondo Federation and Mount Alvernia hospital in the centre of the country.

Ming Wong, secretary general of the federation explains that an employee of the hospital thought some of its patients – young children being treated for cancer – could benefit from the sport. They were “stuck inside playing snakes and ladders”, she says, and the organisation agreed to provide training sessions for them.

It was not until 2004, when Sim‘s mother was diagnosed with Alzheimer’s disease, that she felt she had to return to Singapore.

When she saw the classes taking place, she knew she wanted to be involved. “That was what I had to leave behind in order to be a sister, and so I thought ‘now I’m reunited’,” she says.

Today she runs a weekly class for about 20 people, all of whom have brain tumours or childhood leukaemia. Most are young children, although three are now in their 20s, having trained under Sim for many years.

One of the older students, Ng Wei Hau, was diagnosed with a brain tumour at the age of 12 and given just six months to live by his doctors. “When I first met him he was in a wheelchair. When he reached 21 he was walking with a frame, when he reached 23 he had a stick, and now he walks unaided,” she says. Despite being partially deaf and blind, Wei Hau became a black belt last year under Sim‘s tutelage.

The federation’s charitable work is not just limited to children from the hospital. The organisation works with children’s homes and other disadvantaged groups to offer free taekwondo classes to others who would not usually come into contact with the sport.

For Sim, religion is central to her motivation. Whereas most sisters teach religious education in quite a traditional way, she thinks the taekwondo classes allow her to lead by example instead.

“For me I can actually be a presence and a witness to God’s love without actually quoting scripture,” she says. “It gives me a lot of peace and satisfaction. It’s about evangelising without having to mention going to church.”

6 thoughts on “Taekwondo Classes Lead by a Nun”