Recently, the Pan-American Sports Organization – ODEPA its acronym in Spanish, held its General Assembly in which the main issue was to decide the host country for the 2019 Pan American Games. “Lima, Peru”, said Mexican Mario Vazquez Raña, president of the Pan American Sports Organization. Then the members of the Andean country melted in a hug. The Peruvian capital achieved a crushing victory in the election and became the host of the Pan American Games 2019. In the first round, Lima got, to the surprise of many, 31 votes (two more than the majority needed to win), against 9 for Santiago de Chile and La Punta (Argentina) and the 8 of Ciudad Bolivar (Venezuela). Lima, thus, became the first Peruvian city to host the biggest sporting event in the continent.

“For us this represents a new challenge for PATU, since we have been working hard so that Taekwondo has great performances in all the multi-sports games that are part Olympic continental cycle”  said Ji Ho Choi, president of the Pan American Taekwondo to masTaekwondo.com exclusively. 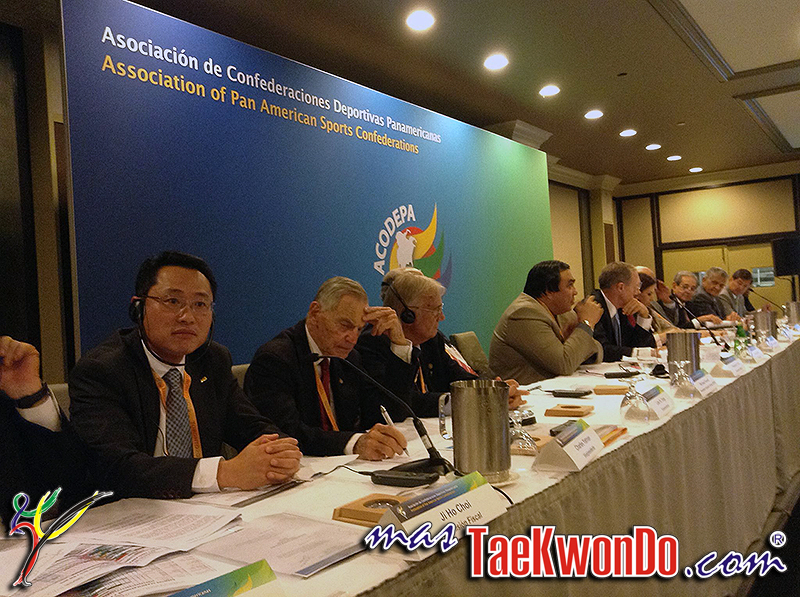 Another issue arising some doubts among the Taekwondo community in the American Continent relating to the Olympic Cycle previous to Rio 2016, is whether Poomsae will be part of the Central American and Caribbean Games in Veracruz 2014 as the inclusion of this discipline in the Bolivarian Games to be held in late November in Trujillo, Peru has created great expectations among athletes who practice this discipline.  It is important to note that the fact Poomsae will be in the Bolivarian Games represents a great success for PATU since it will be the first time Poomsae will participate in a Multi-Sports event.

However, PATU President Mr. Choi explained:  “For the next edition of the Central American and Caribbean Games in Veracruz 2014 there will not be Poomsae, since competition rules and relevant meetings are already closed. In fact I asked the inclusion of Poomsae for Veracruz 2014, but the answer was negative because they argued that Poomsae is not an Olympic sport and it is still a young sport in the PATU events.  But they promised that Poomse will be in the following Central American and Caribbean”.

Regarding the host cities for the different PATU events as the qualifiers for the Central American and Caribbean Games and Pan American Games the information seems to be increasingly clear.  Although there are some cities interested in hosting these events, they have not sent their official bid to PATU.

The countries interested in hosting the Qualifiers to Central American and Caribbean Games is the Dominican Republic, while Mexico, Canada and Dominican Republic are interested in hosting the Qualifiers for the Toronto 2015 Pan American Games. .Choi said that he will evaluate the possibilities once the official bids are submitted and then PATU Executive Committee will make the corresponding decision.  It is expected that these decisions will be made at the end of the year.

An important issue that Ji Ho Choi shared with masTaekwondo.com is that PATU is authorized to have G1 events in 2014.  PATU is only waiting the bids from the countries interested in hosting G1 events. The deadline to receive the respective bids is October 31, 2013.