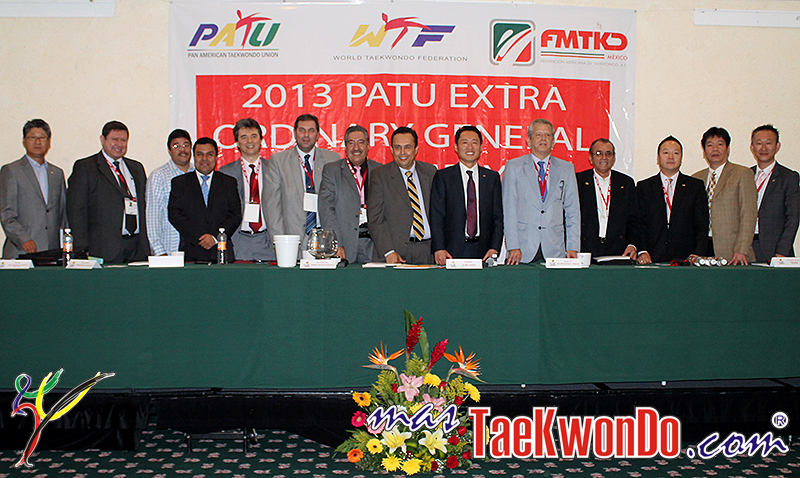 Mr. Ji Ho Choi won his reelection against Oscar Pineda (El Salvador) with 27 votes, against 3, (just one abstention), thus continuing his leadership in PATU for one more period.

The rest of the executive committee:

In addition to elections, very important issues were discussed during the meeting, such as the bid for hosting the qualifying tournament for the upcoming Central American and Caribbean Games Veracruz 2014.  Costa Rica, Colombia and the Dominican Republic showed interest in organizing such event.

Canada presented the application to host the 2014 Pan American Championships; the final decision will be up to the executive committee since no other country expressed interest in organizing it.

Mexico was the only one which showed interest to organizing the qualifying tournament for the 2015 Toronto XVII Pan American Games; such tournament would be held at the end of 2014 or early 2015.

Argentina and the United States showed their interested in organizing the next Pan American Junior and Cadet Championships 2015.

With regard to the organization of championships that award points for the WTF World Ranking, PATU proposed a maximum of five G2 events, a proposal that should have a WTF final approval.

PATU presented the idea of creating an American tour that can promote the visit of European and Asian countries, giving them the possibility to have G2 events as the U.S. Open, the Canada Open and the Mexico Open in a short period of time, between February and March (dates to be confirmed), seeking to benefit the delegations of other continents to reduce travel costs and be able to participate in more than one event.

In short, these were the main topics discussed at the PATU Extraordinary General Assembly yesterday.

Today is the first day of competition and we invite everyone to follow their results through masTaekwondo.com, Official Sponsor of the G1 Pan American Open and Youth and Cadet Pan American Championships Querétaro 2013.