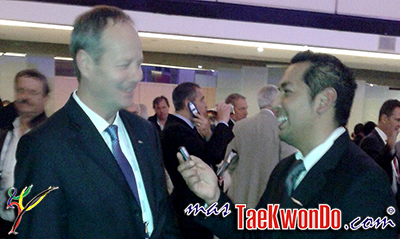 It is a pleasure to meet you again, Mr. Ayer.  What do you think about Tokyo as the host city for the 2020 Olympics?

We had the opportunity to hear all the presentations from the cities; all were excellent presentations. And I think the choice is excellent too, the fact that the next Olympic Games will take place in Tokyo is also good for Taekwondo. We look forward to working together with the Japanese Association, so we can further develop Taekwondo in that country.

Would you please explain to our readers the situation of Taekwondo and the WTF in this session, knowing that Taekwondo was confirmed as a core Olympic sport last February?

Sure. One of the key issues in this OIC Session was the one related to the Olympic program and the first question that the Committee Members  had to resolve was whether to confirm or not the proposal made by the Executive Committee in which they suggested that Taekwondo stayed  as a core sport within the Olympic Programme.  We, of course, came with the idea that our sport would be confirmed, but no one knew in advance what would happen.  There was the possibility that the OIC General Assembly decided not to confirm Taekwondo.   It was difficult to predict what the Olympic Committee would decide, however we got here confident that the proposal of the IOC Executive Committee, would be approved by the General Assembly.

One of the key events of this year is the first edition of the Grand Prix.  Could you tell us something about the preparations?

We’re working on it.  We have two groups, one working in Manchester and another working in the WTF offices in Lausanne and Seoul. Our goal is to work in a very professional way in organizing this competition. Basically, we want to get enough experience in Manchester to continue with the organization of events and apply this learning experience for the series of events during 2014, 2015 and the following years. Our primary objective, as I said, is to work this event in a very professional manner. 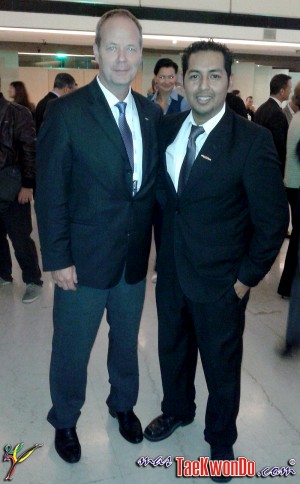 WTF representatives came to Buenos Aires to support the 1st Open Argentina.  What could you tell us about this experience?

It’s true, we are leaving Argentina with a very good impression, this visit was very positive and last week attended the 1st Open of Argentina, which was a success. Our goal is to develop several competitions on different continents so that everyone has the opportunity to participate in class events, in which athletes can obtain Ranking points as the WTF has reinforced the point system.

Sure, we have observed that the WTF awarded the status of G1 to three countries in Latin America this year…

Yes, we want the athletes to score points and be among the best and thus qualify for the Olympic Games. We have to create this competition structure that other sports already have and that we are now implementing in Taekwondo.

Would you like to send a message to the Taekwondo community?

My message to the Taekwondo community is that we hope to be creating opportunities for all, in all countries and in all continents. We are working to achieve that.

We thank you for your time, Jean Marie, and we would like to congratulate you and the WTF for your work in safeguarding the precious Olympic status that our sport should never lose.

Thank you, and I hope to see you in Manchester and I am sure we will have a class tournament there.  We have worked hard in the planning so the development of the event is flawless. Hope to see you there.