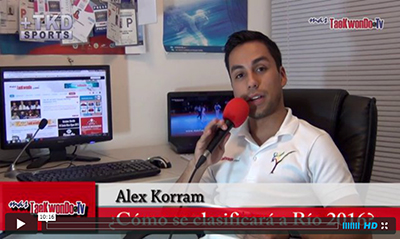 After the confusion generated by an interview made by “MasTaekwondo TV” to a WTF employee (See Note), we decided to speak directly to the WTF Secretary General , Jean Marie Ayer, who explained in depth  what will be the procedures  during the various stages of the Grand Prix and the qualifying system for Rio 2016.

Each National Association shall confirm their participation within two weeks after the notification sent by the WTF.

Now, what happens if there is a tie in points in the Ranking? The athlete who achieved the ranking points in an event of higher rank will be chosen.  Only one athlete in each weight division would get his/her qualification to represent his/her country.

Now, you may wonder:  What happens if more than one athlete from the same National Association are located within the first 6 in the same weight division? The place would be awarded to the best ranked athlete.  In the event that MNA decides that its representative will not be the highest-ranked athlete, the place will be given to the next highest positioned within the first 6.  This opens the possibility that the athlete in the seventh position could be qualified.

It is important to emphasize that each country may qualify a maximum of 8 competitors to the Olympics through the WTF Olympic Ranking, 4 men and 4 women, a situation not seen in the  previous system in which up to 4 athletes per MNA were qualified.

Now if we analyze the numbers of the qualified athletes according to the development expected by the WTF, we found out the following:

We can see a more positive balance among all continents, compared with the results through the World Qualifying system.

Now we will analyze the Continental Qualifying System, which will remain, parallel to the WTF Ranking System.

Each MNA shall qualify a maximum of 4 athletes (2 men and 2 women) through the Continental Qualifying Tournaments only if not all quotas are taken through the Ranking, or if the MNA decides to give up one quota.

72 athletes would qualify through the Continental Qualifying Tournament, in contrast to the 96 athletes that qualified through this via in the previous system.

The host country cannot participate in the Continental Qualifying Tournament.

What about the Wild Cards? A total of 4 athletes (2 women and 2 men) will benefit from the Wild Card to participate in the Olympic Games.  The Wild Cards will be issued to those MNA’s that could not qualified any athlete.

In the event that the host country cannot qualify any athlete through any of the two ways (ranking or qualifying tournament), an invitation will be issued for 2 male and 2 women, as a benefit of being the host.

Who owns the place obtained for the Olympics? The athlete or the MNA? In principle it is for the athlete, but the MNA have the right to accept or not such place. If the MNA rejects the athlete, it MNA may appoint a new athlete as long as he/she is in the top twenty in the Ranking.  Such information must be sent and confirmed to the WTF before May 31, 2016.

In case of the place obtained through the Continental Qualifying Tournament, it will be awarded to the MNA so the MNA shall decide which athlete will represent them, as long as he/she meet all the WTF requirements.

Finally, regarding the Wild Cards, they will be awarded to an athlete of a MNA, based on the decision of a tripartite committee (IOC-CONAC-WTF).

If an athlete gets injured before to participate in the Olympic Games, the MNA must present a proper and well substantiated medical evidence within the time set by the IOC and may replace such athlete, before comply with the provisions of the form of qualification determined by the WTF.

When masTaekwondo.com spoke with Jean-Marie Ayer, WTF Secretary General, he told us: “The system is a good balance to handle performance and universality at the same time. It’s fairer to athletes because we give more weight to a regular performance (versus the performance at a single qualification tournament).”

“The analysis of the current ranking and results at the last world championships shows that a large number of countries have the potential to qualify athletes through ranking (48 places). Regarding universality, we can see that Africa and Oceania did not qualify any athletes through the World qualification tournament for London 2012. We leave their quota for continental qualification untouched and they can only do better than for London 2012 (those 2 continents currently have two World Champions)”

“The other continents have enough top performers to grab places through ranking. So we believe that we will keep a high number of countries participating to the Rio Olympic Games and at the same time we will see the best athletes there”