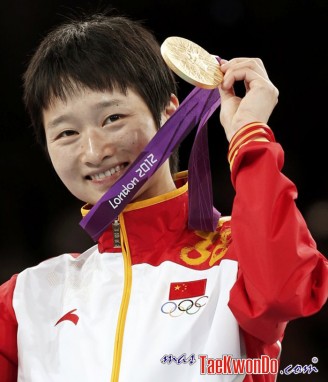 China’s two-time Olympic taekwondo champion Wu Jingyu, 25, on Monday vowed to refocus on her major 49kg category and try to achieve an Olympic gold “hat-trick” in the 2016 Rio Olympic Games according to an article published at english.peopledaily.com.cn.

Wu competed in the 57kg and only finished with a bonze medal at the 12th National Games here on Monday.

“I did not have enough time to lose weight in order to take part in the 49kg class. It is my first time to compete in the 57kg category, so it is hard for me in the matches,” said Wu.

“But the result is acceptable. After all I began training for the National Games just one month ago. I am far from my top form,” she added.

After successfully defending her Olympic title in London, Wu did not take systematic training for more than half a year as she was busy with her college study as well as commercial and public welfare activities.

She skipped the 2013 World Championships in July in Puebla, Mexico, where Chinese female players witnessed the worst-ever results with Ren Dandan‘s bronze in the 46kg event being the only medal earned in Mexico.

“We want Wu to compete in her third Olympics in Rio and she has also expressed her willingness to compete,” said Cao Tao, vice secretary-general of the Chinese Taekwondo Association.

“She will turn 29 in 2016. Hopefully she can maintain her best form by then,” Cao said. “Winning three taekwondo gold medals in three straight Olympic Games is a feat that has never been achieved before. If she can set the record, her name will be written in the history of the sport forever.”

Since winning the gold medal at the fifth Chinese City Games, a quadrennial multi-sports meet only featuring youth athletes, in 2003. The 1.68-meter-high girl hailing from China’s Jiangxi Province has been a phenomenal figure in the country’s taekwondo community.

She almost swept all the gold medals in national-level tournaments she competed in and also claimed a series of international titles ranging from 47kg to 53kg categories, including back-to-back Olympics gold medals and two world titles.

“With Wu not competing in women’s 49kg, all the other players felt the chance to snatch a National Games gold medal was coming,” said 19-year-old Li Zhaoyi, newly-crowned titlist in 49kg on Sunday, which can be seen as an evidence for Wu’s overwhelming dominance in the category. 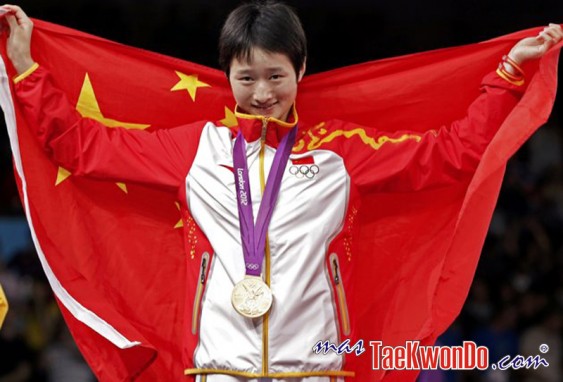 However, competing in the 57kg class turned out to be a brand new challenge for Wu, whose current weight is merely 53 kg.

“Height and weight are my disadvantages, but I would not lose my fighting spirit, or I can never beat opponents one size bigger than me. It is much harder to hit the head of the opponent in 57kg than in 49 class,” said Wu, who is well known for her expert axe kicks.

The disadvantage in the size was not so obvious as Wu enjoyed easy victories in the first two rounds. But Lei Jie, who was once Wu’s training partner and the runner-up at the last National Games, posed great threat to Wu.

“Lei and her coach are very familiar with me. And taking on Lei in training and in the semifinal of the National Games are totally different,” said Wu who had to adopt a kick-and-run strategy but still lost 9-3 to Lei in the semifinal duel.

In the bronze medal playoff, Wu edged her national teammate Hou Yuzhuo, runner-up at last year’s London Olympics, at 5-4 to add a 57kg bronze to her medal collection.

“After the National Games, I will return to 49kg class and start to build up for the 2016 Olympic Games,” said Wu. “In the 57kg here I am just a ‘guest actress’, but I can still benefit a lot from the competitions.”

“Wu is born for taekwondo with her smooth techniques, physical and mental qualifications and also her hard work,” said a proud Cao. “Actually I am not worried too much about her form and techniques. As long as she can handle her personal life well, Wu will be still among the hottest favorites in Rio in 2016.”