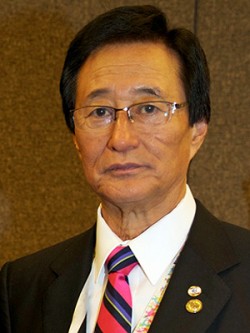 One of the important issues discussed and approved during the meeting, was the appointment of three new honorary members of the Mexican Taekwondo Federation, taking in consideration their great sports career, their deep knowledge and expertise, and their contribution to the development of Taekwondo in México.  The new FMTKD Executive Council honorary members are: Dai Won Moon, Carlos Porfirio Pérez Barrio and Eduardo Martinez Vasquez.

Juan Manuel Lopez Delgado, President of the Mexican Taekwondo Federation made the background presentation of the three honorary members to the Executive Council and everyone could see that they all exceed the requirements to occupy this honor position within the Mexican Federation.

“I am aware that the presence of Masters Dai Won Moon, Carlos Porfirio Perez Barrio, and Eduardo Martínez Vásquez, is very significant for all of us.  I am sure we all will take advantage of their expertise and knowledge.  Taekwondo in México is happy for this significant fact”, said Lopez Delgado.

Another issue approved by the Executive Council was the appointment as a new member of Dr. Yaseff Esau Zamora Alvarado, a landmark of Taekwondo in the state of Veracruz, replacing Professor Mercedes Iberry, who resigned from the position.