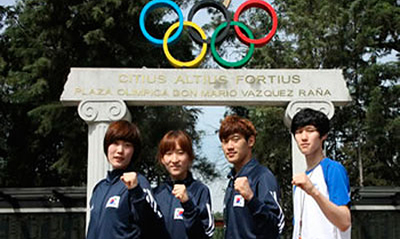 The World Taekwondo Championship that will be held in the city of Puebla and which will have masTaekwondo.com complete coverage will be taking place on July 15-21.

As informed by the Mexican Taekwondo Federation, the delegations of South Korea, Netherlands and Italy arrived in Mexico City on Thursday June 27, each of them with its Olympic and World stars.

The three squads will be making their acclimatization at the CDOM where the Mexican team is also concentrated.  Given the importance of the event, their training sessions would be held at different times: Netherlands trains from 9 to 11, the Mexican representatives from 12:30 to 13:30, while the South Koreans train from 15 to 17.  On the other hand, Italy adapted its training sessions in a different hour.

Mexicans, Koreans and Italians will stay at the CDOM until July 8; then they all will travel to the city of Puebla. The Netherlands will do it on the 10th.