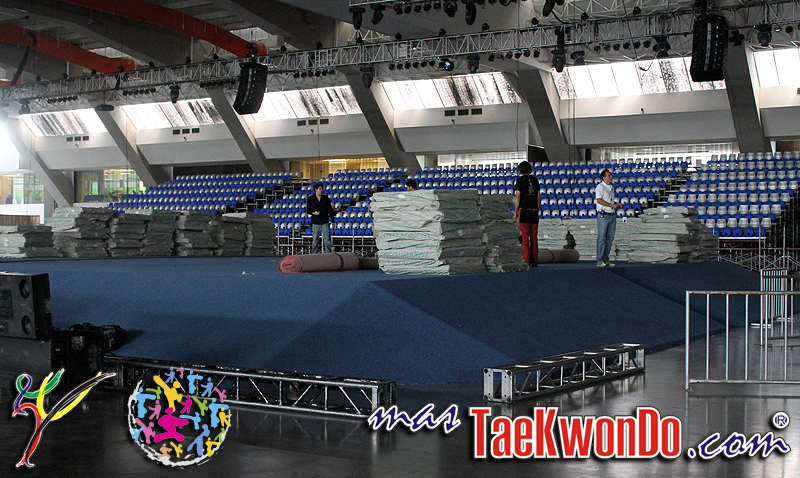 To make a little history on the venue for the 21th (14th Women `s) WTF World Taekwondo Championships, Puebla 2013, we can tell you that the Convention and Exhibition Center in the city of Puebla is located in the foothills of Forts Loreto and Guadalupe, site of great importance for the history of Mexico because during colonial time, Franciscan priests built a chapel which later became a larger temple.  Then Fathers Betlemitas took it and built a greater temple at the west of the first one, adopting the name of the Virgin of Loreto and Guadalupe.

In 1815 they were transformed into fortresses to resist the attacks of the insurgent forces. The most important fight was the so-called Battle of Puebla on May 5, 1862.  A Mexican victory of global resonance as the Mexican army defeated the French army, one of the most experienced and reputable of that time.

Over 150 years later this place will host the most important event of Taekwondo:  The World Championships.

Yesterday,  masTaekwondo.com visited  the Convention and Exhibition Center facilities in the  City of Puebla and all promises that, as happened with Mexico´s  history, this site will be remembered  because there will be “a before and after” in Taekwondo history after Puebla 2013.

The different national teams have come to this place to make the corresponding accreditations and also to have training sessions. The organization in charge of the accreditation system led by Justin Tenbeth, Project Manager for WTF Global Membership System (GMS) has worked perfectly, speeding up significantly the delivery of accreditations. (See Interviews to Justin Tenbeth and Carlos Rodríguez in masTaekwondo TV).

The competition areas, lighting and sound system are being assembled in one of the giant rooms in this exhibition center.

Another place that promises to be visited is the exhibition area where different companies will be presenting their products and services;  masTaekwondo.com will make its debut as a brand.

The organization and logistics of this event up to now has shown excellence, once again placing Mexico as the best host to organize mega events like this, where 133 nations will compete for the podium and be part of Taekwondo´s great history.

Follow masTaekwondo.com exclusive coverage because we will tell you minute by minute all what happens in Puebla 2013.