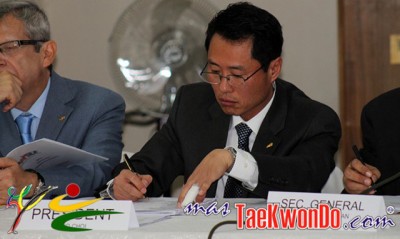 On October 9, 2012, during the 18th PATU General Assembly held in Sucre, Bolivia, the elections for the PATU Executive Committee were also held; however, due to an Article in the WTF Statutes, all Continental Union must hold elections within six months after the election of the highest governing body of Taekwondo.

Therefore, PATU elections shall be conducted again since the WTF just elected its authorities during the meeting held on July 14 in Puebla, Mexico and the elections in the American continent will be conducted on September 19 in Queretaro, Mexico, during the Pan American Junior and Cadet Championships, where, according to Mr. Choi´s explanations, the PATU General Assembly will be carried out.  In this meeting the General Assembly will make a new election or, on the other hand, will approved and ratify the elections held in Sucre, Bolivia last year.

At one point it was speculated that PATU Assembly would take place during the Costa Rica Open in October, but the president himself denied this fact, confirming the meeting for September 19 in Queretaro.

Ji Ho Choi told us exclusively: “If everyone agrees with the elected committee, the General Assembly will only approve the elections.  However, if for any reason, someone does not agree, for example with a vice president of the area and there is a qualified candidate for a position in the Executive Committee of the National Association, the elections would take place. “

At the moment, there are no official nominations for a position in the PATU Executive Committee.

In relation to the doubts and questions arouse among the PATU National Associations members regarding the introduction of the KP & P PSS, it was speculated the system would be used in Querétaro.  However, after the meeting held by members of PATU during the World Championship held recently in Puebla, it was determined that for the event in Queretaro and the remaining events in this year, it will be allowed the use of DAEDO PSS.  On the other hand, for the Pan American Open in the Black Belt category the KP & P PSS will be used; “the intention is to test the system and that people begin to recognize the differences and functioning of these protectors” said Choi.  Additionally, he said that that for next year all PATU events will use KP & P PSS, stressing that for the Central American and Caribbean Games in Veracruz, Mexico, it has been agreed with the organization the use of KP & P PSS.