Hong told reporters that he withdrew his candidacy, promising to cooperate with the current president for further success of Taekwondo at the Olympics.

“After some contemplation, I concluded that it would not be appropriate to compete with Choue in front of world Taekwondo members,” Hong said. “But as World Taekwondo Headquarters’ chairman of the board and a WTF member, I will continue to work for the sport.”

The election would have been the first contested between Koreans since the WTF’s foundation on May 28, 1973, if Hong had run.

Hong became World Taekwondo Headquarters’ chairman of the board on June 17 after he was appointed as the party’s secretary general on May 21. So, many were concerned that Hong would not have time for another important position.

Hong’s comment last month that “The election will not be a competition between Koreans” also stirred speculation that he might drop his candidacy.

He admitted Friday that he would not have time for another critical position, saying “It will be physically impossible.” 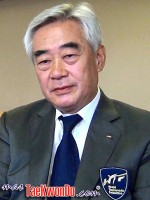 As a result, Choue will be expected to serve another four-year term. He was re-elected for his third term at the WTF General Assembly at the Scandic Copenhagen Hotel in Copenhagen, Denmark on Oct. 13, 2009.

Choue has led the organization since June 2004.

The WTF will host the first World Taekwondo Championship, scheduled from July 15 to 21 in Puebla , after the International Olympic Committee executive board decided on Feb. 12 to include Taekwondo in the list of 25 “core” Olympic sports for the 2020 Summer Games.