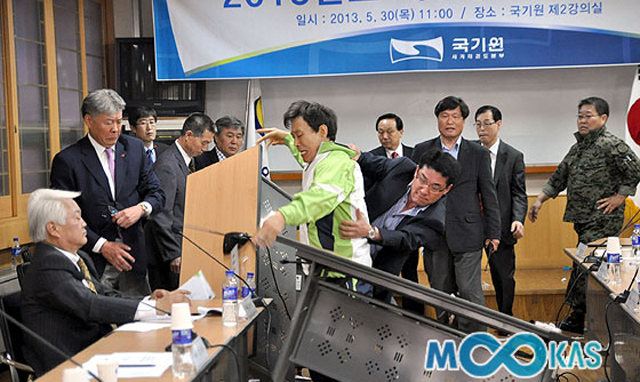 Thanks to the Korean information media MOOKAS, masTaekwondo.com had access to the video that shows the incidents that took place within the walls of what is known as “The Mecca of World Taekwondo”.

Everything indicates that Daek.keun Kim, representative of the Citizen Association for an Honest Taekwondo, and Sang-Yong Hong, member of the Citizen Solidarity for  the Future of Taekwondo, abruptly interrupted an extraordinary meeting of the Kukkiwon Executive Committee which continues without the figure of President, since Won-Sik Kang finalized his mandate a week ago, and apparently they have not reached an agreement on who will be his successor.

Kukkiwon was founded in 1972 as the Headquarters of Taekwondo, playing an important role in the development of this sport, but for several years it has gone through serious situations due to the differences existing with the WTF and the South Korean government, with which Kukkiwon has had tax and fiscal problems.

This Thursday incident, in which two men broke in violently, throwing garbage and a unidentified liquid throughout the room, yelling, insulting and even showing aggressive attitudes against members of the Executive Committee clearly shows that the situation at Kukkiwon is far to be solved.

We must expect the consequences of this confrontation which do not help to improve the already deteriorated image of the” Mecca of World Taekwondo”.

0 thoughts on “Serious scandal at Kukkiwon Headquarters in Seul”