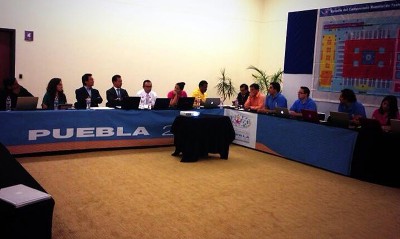 Authorities and Organizing Committee discussed each of the technical and logistical details at a meeting previous to the tour, which began at a very early hour, discussing issues relating to logistics, lodging, transportation, security and participation of volunteers, among other topics.

It was also confirmed that 123 countries have already registered to take part in this championship which will represent an important economic benefit for the state.

Master Dai Won Moon was satisfied with the progress Puebla authorities presented to him during the meeting and tour, “we are ready to receive the World Taekwondo Championships which hopefully will be the best in the discipline, as Puebla has become the spearhead of this martial art.”

During the tour of the Exhibitor and Convention Center, located in the historic area of Fuerte de Loreto and Guadalupe, venue of this great event, the executives supervised the showrooms to be used for competition areas, warming-up and weighing area, as well as the halls to be used for WTF meetings and assemblies and the organizing committee offices.

It should be mentioned that the tour was guided by Matthijs Kool, Exhibition and Convention Center CEO, in order to adjust the technical and logistical details for the realization of the great event.

In the afternoon, members of the Organizing Committee conducted inspections at the hotels that will be hosting athletes from 160 countries in order to confirm that everything is ready to welcome them.