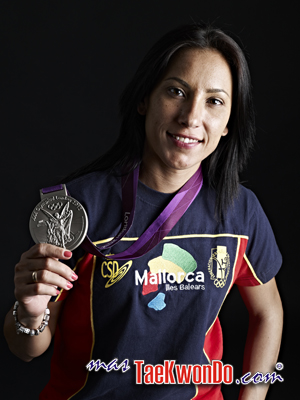 New technologies allow, among other things, to communicate with someone who is in the other side of the ocean.  A call and a dialogue starts between someone sitting in San Telmo Bar in Buenos Aires Argentina, a place that has little to do with taekwondo, and a Spanish athlete.

When the answer from the other side says:  “I will not compete in the World Championships this year” one feels speechless and then goes on:  “I don´t know if I will get to Rio de Janeiro; my body will tell”.

There is no tears for what will be lost, neither frustration by her absence, instead Brigitte Yagüe, calmed, serene, peace-minded, and just finished eating, sitting 12 thousand miles away, says that she will not be in Puebla due to her physical condition –she has a hamstrings injury–and that she will start training in September.

“If there is a medal, there will be a path, if not, there will be another path.  There are two different paths”.  Before the London 2012 Olympic Games began, Yagüe was doubtful about her future.  Later we would witness the images on TV of the Spanish athlete biting the medal, as Rafael Nadal does, the silver medal and then talking to her mom in front of the Spanish TV cameras: “Yes, yes, Mom, I did it, look at my medal!”    “If there is a medal, the change is drastic as long media coverage is concerned, and at the personal level, it is a great satisfaction.  It was one of my last chances to get a medal.  If I had not won it, I would have retired.  If I win is because my conditions are excellent… and I won” says the “Queen of Taekwondo”•

But the word “retired” sounds repeatedly from the mouth of the Majorcan athlete.  “At the World Championships in Korea in 2001, if I did not get a medal, I would have retired.  But the medal gave me strength to continue competing”.  She also considered retiring when she suffered an injury before the Olympic qualifying tournaments for Beijing 2008.

Yagüe wants to be close to taekwondo in the future:  “It is clear for me that I don´t want to coach abroad, to a national team. I prefer to stay in Majorca, in a different level, it is not necessary to coach a national team”.  She wants to stay in Spain, a country going through an economical crisis that is affecting her, too, but she is optimistic.  “I think we all can make it, if we are united, along with the politicians, we can make it through and overcome this crisis” says the three-time World Champion.

“What do I think about the nickname?” says repeating my question.  In less than a second she modestly answers that she doesn´t consider herself as the “Queen of Taekwondo” and that she feels fortunate to have achieved many titles in national, international and European  championships and that there are many athletes with excellent quality as the Chinese, Wu Jingyu.  “With the Olympic Medal –says the 32-year-old Spanish—I don´t have any pending goals in my sports career as athlete although it is not a gold one.  I fought for the gold, but I just wanted a medal, no matter if it was silver or bronze.  This achievement took me eight years”.

Yagüe said that her “body will tell”, that she is preparing and she is taking it easy this year, recovering from her injury.  Brigitte, in automotive terms, is in boxes, preparing to hit the road and refueling.  Hopefully the circuit will get to Rio de Janeiro and hopefully she will be up in the podium, as the “Queen of Taekwondo” always does.