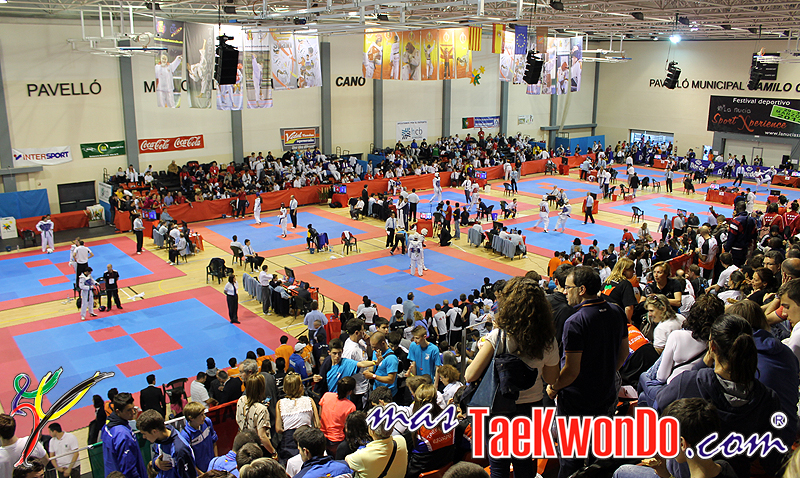 The Camilo Cano venue, in La Nucia was completely full from the start to the end, first due to the 11th ETU European Taekwondo Poomsae Championships held from April 30 to May 2 and then the XI Spanish Taekwondo Open.

On Saturday, May 4 all Taekwondo lovers had the opportunity to experience ecstasy and excitement as twenty Olympic medalists gathered at the venue.  On the ten tatamis, they showed fights at the highest level.

The medal table of the National Teams at the XI Spanish Taekwondo Open in senior category is made up as follows:

The bad news for Spain was the knee injury of the Spanish Olympic Gold Melalist in London 2012, Joel Gonzalez Bonilla, who had to leave the competition in the semifinals after beating a tough Turkish rival.

For Joel it was his debut -63 kg division, as he had been World Champion and Olympic Champion Fly (-58 Kg) category.

Looking for the main team for Puebla

Many of the National Teams went to the Iberian lands looking to define the main team that will represent their nations at the World Taekwondo Championships in July in Puebla. This was the case of Iran, Turkey and Spain itself; according to the results they would take a decision in those divisions in which they still have some doubts.

All the people who wanted to see high level combats went home completely satisfied, with a smile in the face and happy as if they had gone to a real feast.

La Nucía Mayor showed great satisfaction with the development of the event: “It all has been amazing in this international competition: the level, competitiveness, athletes from 38 countries, full stands, great sportsmanship and excellent organization.  In La Nucía we had 20 Olympic medalists, World and European champions competing at the highest level to reach the World Championships in the best physical conditions this summer in Mexico.  A historic sports event that reconfirms our town as the 2013 European Sports Villa and National Sports Award 2012 “.

Spain won 68 medals during the last day in the cadet and junior categories on Sunday May 5. The national team had the first place in both junior cadets in an intense day of fighting, where 738 athletes competed from more than 20 countries. It was the day with more public attendance a finishing touch for an intense week.

The medal table in the junior category is as follows:

In cadets the results were: