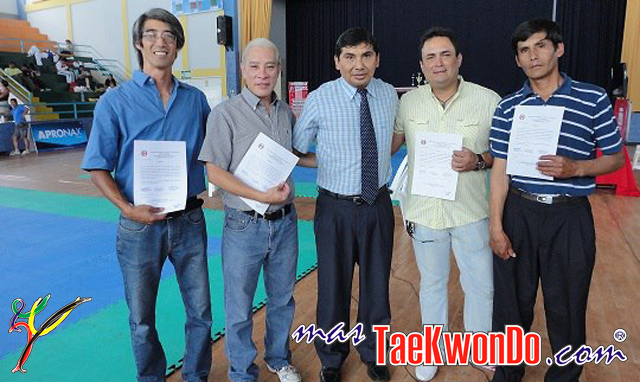 While elections had already been held in Lima on January 27, 2013, it was not until last week that the Peruvian Sports Institute (IPD acronym in Spanish) confirmed and recognized the new Board of Directors of Peruvian Sports Taekwondo Federation.

The delay was caused by an appeal requested by Peruvian Federation former President, Yunggi Jeon, who integrated the list opposite to that of Tanaka. This appeal was dismissed by the relevant authorities and during a meeting held on May 3, the IPD Council unanimously approved the recognition of the new Board of the Peruvian Sports Taekwondo Federation.

Last year Joao Tanaka formed the group called “Pro Taekwondo Initiative” and distributed a notarized letter signed by several Peruvian clubs demanding to call for elections (according to the date established by the Statutes). The IPD sent a notification to various federations, including Taekwondo Federation, in which they demanded to renew their board of directors by January 31, 2013; otherwise the IPD would take over the federation´s administration.

In this context, the Federation directed by Jeon Yunggi summoned for a General Assembly in order to form an Electoral Committee on January 12, 2013.  During this Assembly, the Elections Committee was elected by majority and a by-law was also approved by vote.

The elections were held on January 27.  However, some of the club representatives claimed that there were some clubs that did not meet the requirements to be able to vote and demanded to stick to the by-laws.  Colleges, universities and military schools did not have the right to vote.

After all demands were solved the elections were held in the Hall of the Americas of the National Stadium, where Joao Tanaka, taekwondo professional with a long history in Peru, led the “List 2”  won by a clear victory of 19 votes to 9.

The new Board of Directors of the Peruvian Federation will be in charge from 2013 to 2016 and is composed as follows: