Mary Borello was born in Buenos Aires, Argentina; she has the Guatemalan citizenship for adoption and has Italian origin. In 1990 she was President of the Selection Committee of the Guatemalan Taekwondo Federation.  Being in that position she saw some problems within the institution, because as she herself explains, “I realized that the Federation did not comply with the World Taekwondo Federation regulations … “

She informed about this situation to the Guatemalan Olympic Committee and as a result of her actions, a standardizing commission was established, being herself the President.  From that moment on, the Guatemalan taekwondo began to experience drastic changes.  In 1996 she became the President of the National Taekwondo Federation, a position she still holds today.

As head of the Guatemalan Taekwondo Federation she not only cared for the sports area itself, but she has done a strong emphasis on social aspects such as: bringing Taekwondo to prisons through the Social Reintegration Program; working with children with cancer through the “Kicking Cancer” program; building self confidence to children who suffer from Down syndrome for ten years; promoting Para-Taekwondo with athletes with disabilities.

Mary, as she is known in the taekwondo family around the world, has received countless awards and recognitions throughout her career as Taekwondo leader, but three of them makes her feel prouder: the Excellence Award given by the Count Jacques Rogge, President of the International Olympic Committee as well as the one she received in Seoul, the Sports Merit Medal granted by the President of the Republic of South Korea, Roh Moo-Hyun in 2003.  The most recent was the Olympic Cross awarded by the Guatemalan Olympic Committee.

This 5th Dan holder entered WTF in1996 as an Executive Council Member, a position she still holds after seventeen years with great dedication.

A few weeks before the WTF elections, Borello is running again for a position in the WTF to continue her work and efforts within the Executive Council and so we decided to speak exclusively with her. 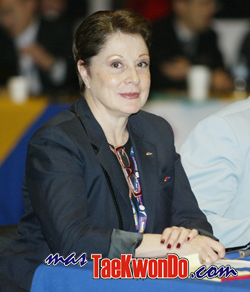 Hi Mary, thanks for giving us your time.  I want to start directly with your international activities, please tell us how you became a WTF Council Member?

I became a WTF Council Member in 1996, a totally world of men, as I was the only woman, but that was no impediment because my colleagues coming from different continents gave me a respectful welcome, as a lady deserves. I have always felt really comfortable with all my colleagues.

Do you remember when you meet Dr. Choue?

Absolutely, it was in Inchon, South Korea, during an Executive Council meeting, long before he became WTF president. My friend Daiwon Moon from Mexico introduced me to him and I immediately realized he was a different man and that he would certainly be a major change for our loved sport.

In what way you see him different?

First of all and the most important characteristic of his personality is his human quality.  One was used to a much more top-down structure and as I said before, very men oriented. Dr. Choue began opening Taekwondo world so that his main objective was the integration, without any regard to sex, religion or nationality. Just looking at how the WTF is integrated now one can realize what I am saying.

What you felt the day you met Dr. Choue, was it reflected throughout his administration?

Absolutely! I could make a list of his achievements just as the one masTaekwondo.com published a few weeks ago, but I want to highlight something that often is not said and I repeat his humanity.

Dr. Choue approached every one, presidents, coaches and athletes. He united the taekwondo family and made a continued and strong effort to enlarge that family.  Do not forget that we are among the international sports federations with more members.

I often like to define him as “the approaching president “, since no one has traveled like him. He has travelled several times to Guatemala and many countries from Central America, South America, Africa and Oceania. I think that his desire to be close to taekwondo people is his main virtue.  But most important is that he has taught us to be brothers and sisters, regardless of whether there are differences among people, he always has prioritized the harmony for athletes, which ultimately should be the main beneficiaries of all our work. 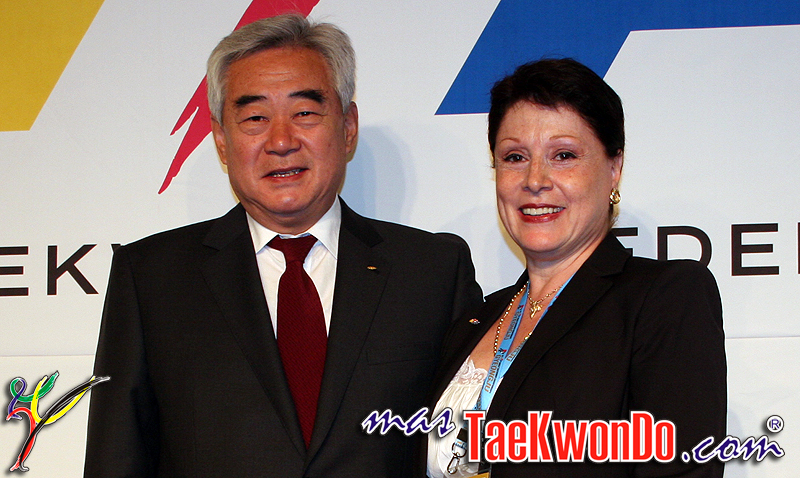 Do you think that Dr. Choue will continue to lead the WTF as president after the elections?

I have no doubt, I’m pretty sure. It is impossible that people do not see the wonderful work he has done throughout his leadership, and will continue to do.  The example he has given of concord, harmony and the way he has formed a family with such a cultural diversity, is an example for anyone who ever wants to hold a leader position in any institution.

His administration is an example. The growth that Taekwondo has had in all areas is simply amazing. He formed a team work that reached all the goals set. The most important achievement was the confirmation of Taekwondo for 2020 Olympics.

You are permanently seen very active in many World and Olympics championships, participating actively in the events from start to finish. Could you tell us how your participation in Olympics has been?

I consider important to say that in 2005 I was elected President of the WTF Women Committee and in 2006 I became member of the WTF Paralympic Committee. In this area I have developed a strong program working with youngsters with Down syndrome. The Guatemala Taekwondo Federation has implemented a training system dedicated to people with this genetic alteration for more than nine years.  We have not forgotten the people with disabilities; we have trained athletes with amputations who have had the opportunity to participate in the Para-Taekwondo Championships.

Being completely honest, I enjoy my work very much in Taekwondo and to me is a true honor to be part of this team that Choue leads.

Mary, masTaekwondo deeply appreciates your time.  Would you like to add something else?

Yes, I would like to add something that it is very important for me, is the attention that Dr. Choue had toward me and my family a few days ago. My husband passed away last week and one of the first tokens of tenderness and sympathy I received was a bouquet of white roses sent by Dr. Choue with a beautiful condolence note. That speaks of what it is as a friend and human being. I have no words to thank him.