When talking about taekwondo, we usually focus on the Continental Unions of Asia, Europe and America and in a lesser extent on Africa.  However, Oceania is an important member of the World Taekwondo Federation, and within Oceania, Australia has an outstanding performance, holding two Olympic Medals and is always active within the WTF sanctioned events.

With the purpose to get closer to the “insular continent” and get to know more about OTU and its principal nation, Australia, masTaekwondo.com had a long talk with Mr. Kotsifas, who kindly answered some questions in his office located in Melbourne, Australia. 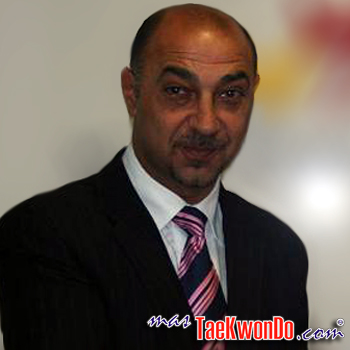 As Sports Taekwondo Australia (STA) President how do you see the development of Taekwondo in Australia?

Australia had great success at the Sydney Games in 2000 winning a gold and silver medal. Despite the fact that we always qualify athletes for successive Olympic Games since 2000 we have not achieved any further Olympic medals although some of our athletes have progressed to the Quarter finals in Olympic Games but have failed to achieve a medal.

We are now rebuilding and over the next 4- 6 years I expect significant improvements in our athletes´ international performance.

Funding plays a large part in an athlete’s ability to succeed. Unfortunately, we have been without funding from government for the last 7 years and this has severely impacted on our performance but we are very confident that we will achieve significant funding very soon which will create enormous opportunities for our athletes and sport in Australia and this will be reflected in our international performances over the next few years.

We have a very large number of dedicated and enthusiastic coaches, referees and officials at all levels and we have many people who devote their lives to promoting our sport and this motivates the rest of the Australian Taekwondo Community. We are at a very exciting and positive stage in our development.

What have been your achievements during your leadership as STA President?

I have tried to bring strong leadership to our MNA and I have at all times, endeavored to build and promote consensus and to encourage tolerance of different viewpoints. I believe we have established a strong, progressive and very innovative MNA which is always developing new initiatives and providing quality services to its members and athletes.  In 2012 we staged our first WTF sanctioned world ranked Australian open event. In 2013 we will again hold the WTF sanctioned Australian open event in November 22-24and this year it will be a very large and successful event proving our local athletes with great opportunity to gain world ranking points.

Do you have new projects for the advancement of Taekwondo in Australia?

We have been the only WTF MNA to fully implement the WTF Global Membership system (GMS) in close cooperation with the WTF and it has been a great success. We have developed this system over the last 2 years and it now provides all our members with a global membership system which is the way of the future for all MNA’s. We are continuing to develop this system with then WTF and in 2013 we seeing great innovations in this system. So our administration is very well developed at the moment providing great benefits to all our members.

We have developed grass roots participation programs and high performance programs and I look forward to seeing many international teams coming to Australia to be part of our international exchange programs. Because we live so far away from the rest of the world, it has been very difficult to access quality competitions on a regular basis. Consequently, we aim to bring many national teams and coaches from other MNA’s to Australia to train with our athletes and to conduct valuable seminars which will be of benefit to everyone.

Our Schools programs have also been very successful as we see it as imperative that we continue to promote Taekwondo as a mainstream sport within schools and to identify talented athletes at a very young age.

Like every other MNA it is to promote our sport, to support and provide benefits to our members, to assist our athletes and to provide them with every opportunity possible to achieve their goals as athletes. International success is very important also so our ability to develop elite athletes who can achieve international success is also a very important goal. We also aim to educate our referees, coaches and officials so that can be confident in what they do and to encourage them to participate internationally.

We aim to market and promote Taekwondo as a school sport so as to build a strong base level of participation for students at a very young age.

As OTU Secretary General, how do you see the development of Taekwondo in Oceania?

The OTU is the most underdeveloped of all the Continental unions because we re the newest CU in the WTF, having been established only in 2005. Our member nations are islands so it is very difficult to coordinate activities which are easily accessible to everyone in the Oceania region. Our member nations are also the poorest with little government funding and support so we have a big task ahead of us. We are fortunate to have as our president Mr. Phil Coles who has a long history as an IOC member and who is also a Vice president of the WTF. He has brought to the OTU much needed experience and has assisted us greatly in our development over a very short period of time.

Nonetheless, we have enormous potential and very good athletes but they require financial assistance to gain valuable international competition. Unlike Europe and other CU’s we do not have the ability to access frequent high level competitions. To do so, our athletes need to travel long distances and at great cost.

It is therefore imperative that we receive greater financial assistance in order to develop which is also very important for the WTF and our sport internationally. A strong Oceania region also strengthens the WTF.

This is why it is important that special consideration be given to the Oceania region to assist it in reaching its true potential. We cannot do much with the resources we currently have. An urgent review of our level of support is now required.

We are only allocated 8 Olympic places which is far lower than what is allocated to every other CU.

We are slowly extending our participation at the Olympic Games to more and more Oceania nations but if we are serious about assisting our Oceania region, we need more Olympic places, wild card entries, greater financial assistance and greater opportunity for all Oceania nations and athletes.

The OTU does not have the capacity to generate high levels of income such as is the case with other larger well established CU’s. We have far fewer clubs and fewer athletes so it is virtually impossible to generate OTU funds to be able to support our members and their /our emerging athletes. It concerns me greatly that we have very few member nations participating at WTF sanctioned events and this only results in a lack of international exposure and experience for their athletes. The reason for this is that they cannot afford to send their teams to these events and the athletes miss out. We need to find a better way of supporting them to make sure they are all able to attend.

This is the challenge that the OTU and the WTF face in the lead up to Rio in 2016.

We must remember that for some of our nations, they had the opportunity to be represented at an Olympic Games only via their Taekwondo athletes so to these nations, this was a great moment in their nations sporting history. 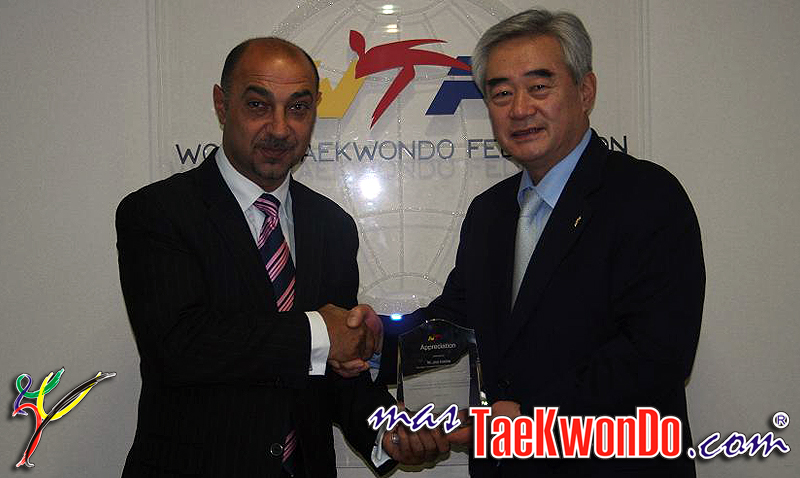 The elections in WTF are coming, what do you think about Dr. Choue´s term?

The WTF President has been a great and very successful leader. He has led the WTF in very difficult and challenging circumstances and has provided strong leadership and confidence within the Worldwide Taekwondo community. He has also achieved great success and has elevated our sport to one of the most universal and widely practiced sports throughout the world. He has secured our sport as an ongoing permanent Olympic sport and has established strong links with the IOC and other relevant international sporting bodies.

The WTF Peace corps, solidarity initiatives, youth camps, seminars and ongoing education have all been successful initiatives. The establishments of the Grand Prix in 2013, cadet championships, the video replay changes, have all been significant achievements of our President and his close team.

We now are one of the largest IF’s worldwide and more importantly other sports are now looking to what our sport has achieved in an attempt to mirror our initiatives and achievements.

Our sport is now one of the few sports where an athlete can achieve success regardless of where they live and despite the resources they have available to them. Our sport reaches out to developed and underdeveloped countries providing equal opportunity. You only have to look at some of the Olympic medalists who have come from very difficult and underprivileged backgrounds. This is a great testament to the universality of our great sport and to our Presidents achievements over his term of office.

The president has built a strong, progressive and innovative WTF and he needs to be given credit and acknowledgement for his great achievements and his strong and modern leadership.

Since when do you know Dr. Choue?

I have known him since he was first elected as the WTF President. We have a close working relationship and he is highly respected as a leader.

What do you think about his reelection candidacy?

He is the only person who has the capacity and the credentials to lead us into the future. He has our full support and always will. He has made many personal sacrifices for our sport and for the benefit of the WTF. He is passionate about Taekwondo and about developing the WTF into one of the most highly respected IF’s which is renowned for its innovation and progression.

I am very confident he will be re elected. There is no doubt about that and I know he has the full support of all other MNA’s. The result of the election in July in Puebla, Mexico will prove this point.

We know you are Member of the Expansion Committee, what is the main goal on that Committee?

Its main purpose is to assist the WTF in developing new initiatives. It provides the WTF with the ability to hear from the Continental Unions about what is happening in each continent so the WTF is better placed to address various matters that need attention and to develop policies and programs which best suit the CU’s. The Global athlete license and the GMS have all been initiatives of the Expansion Committee. The expansion committee outcomes are recommended to the President and to the WTF executive council for approval. We also look at rule changes that are required, new programs to be implemented, examine marketing and promotion initiatives as well as addressing issues that need resolution.

It is a forum where each continental union has the ability to freely and openly discuss matters and to receive valuable feedback fro other CU’s and the WTF. I believe we will see many exciting new initiatives arising from the Expansion Committee in 2013 and in years to come.

Do you think that Oceania will support to Dr.Choue´s reelection?

Absolutely, there is no doubt about that. He has the OTU’s strong support.

We are looking forward to the next few years as we move towards Rio in 2016. I believe you will see even more initiates and changes that will revolutionize our sport and which will make it even more exciting as a spectator and Olympic sport.