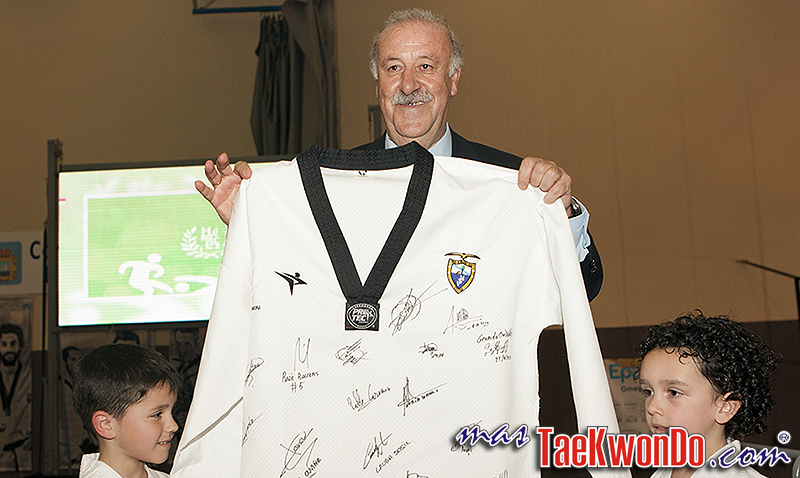 This past April 25th will be remembered as one of the biggest days in the history of the Natural Sport Club Videlgi Ribeira and the Galician Taekwondo Federation. Due to the visit of Mr. Vicente del Bosque González who received a Gold and Diamonds insignia of the entity mentioned, as well as an Honorary Black Belt from the Galician Taekwondo Federation.

Mr. Vicente was received by more than a thousand young people who gave him a warm welcome chanting his name, “Vincent, Vincent, Vincent ….” The manager of the National World Champion Team greeted them all for a while. And did not hesitate to give a warm hug to all 70 Members of the Amicos and Amber Associations of people with disabilities.

The introduction was given by Mr. Gabriel Masfurroll Lacambra, friend of the National coach (who received the insignia in 2012), he highlighted Mr. Vicente’s friendly nature and above all the human values that he promulgates.

The speech of Mr. del Bosque was full of coherence and reminded all the present youngsters, ” study and enjoy this wonderful time of your life, listen to your parents, teachers and coaches, and especially despite of the crisis that is currently shaking our country, remember that we live in a wonderful place. ”

After the talk, various prizes were delivered. The first one was given to Paula Garcia Villora in hands of World Para-Taekwondo Champion, , the prize was a € 3,000 scholarship for the Alex Foundation, dedicated to promoting the adapted sport.

This scholarship program comes from “Taekwondo for Equality“, which the club has been developing for several years in different places.

Then the President of the Galician Taekwondo Federation, Merce Barrientos Varela, gave the Honorary Black Belt to Mr. Vicente and later, President of the Club, José Francisco Agrelo, gave him the Gold and Diamonds Insignia, while two young practitioners of Taekwondo, gave him two doboks signed by the six-time Spanish Club Champions and Europe Sub-champions, one with the name of Vicente del Bosque and another as a gift for his son Alvaro.

The event was concluded by the Mayor of Ribeira, Manuel Ruiz Rivas, who handed the headlights of “Corrubedo” to Paula Garcia, Gabriel Masfurroll and Vicente del Bosque, institutional gift of this City Council.