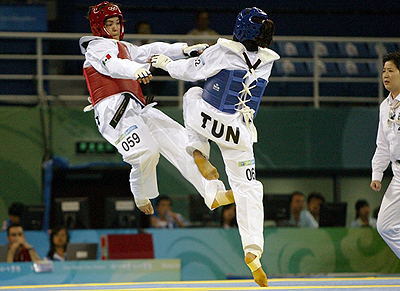 Tunisia’s participation in the Belgian Open, where the Israel National Team was also participating, was considered by the Ministry of Youth and Sports of Tunisia as “a mockery of the Tunisian people”

In a statement released by Tunisian Ministry in the official radio, they said that an investigation was immediately opened in order to inquiry  the “participation of members of the Tunisia Taekwondo Team in the International Championship in Belgium where  they competed against Israel without prior consultation with the Supervisory Authority “.

The Taekwondo Federation of Tunisia called for “the immediate suspension of the activities of those who caused this mockery – including technical and administrative staff who accompanied the Tunisia delegation – until the investigation is complete and the accountability established.”

Situations like these, in which Islamic countries refuse to compete against Israeli athletes, are very common, mainly in the Iranian teams.

During the first Youth Olympic Games in Singapore in 2010, the Iranian taekwondo, Mohammad Soleimani, did not show up to compete the Final against the Israeli Gili Haimovitz, claiming that he had an injury in one of his ankles. There was uproar by this fact and different media newspapers said it was contentious and controversial attitude. However, in reality, this is a procedure that we have seen for many years, not only in Taekwondo, but in sports in general.

Gili Haimovitz of Israel, took the podium and took the Olympic gold medal without having fought. An alleged injury did not allow his opponent to fight for the medal, which was a logical decision taking into account that Taekwondo is combat sport, but when we see that the athlete is from Iran, one already knows in advance, “Iran vs Israel next fight? Ahhh … surely Iran does not show up”.

Not long ago, in an international important competition, where an Iranian refused to compete against an Israeli athlete, a very important WTF official said “… by forcing them to compete or punish them for not doing so, we will not be able to fix their history of war. We´d better move to the next fight …”

0 thoughts on “Public rejection in Tunisia for participating in Open”