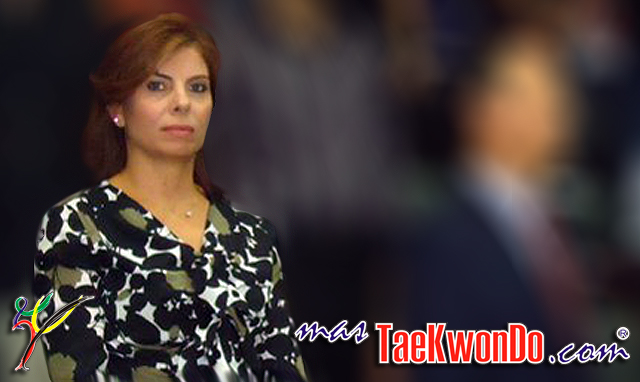 Just a few days after the deadline for applications reception for the upcoming WTF elections, we wanted to talk to different Taekwondo political personalities and we started communicating to Beirut, Lebanon, in the Middle East, to interview Carine Lahoud.  Among other things she told us how she became part of the WTF Executive Council and what she expects in the next elections to be held in July in Puebla, Mexico. Several women are members of the WTF Executive Council and we will talk to all of them.

Hello Mrs. Lahoud. This is masTaekwondo.com; do you have some minutes to talk to us?

Yes, of course.  It is a pleasure to talk to masTaekwondo.com.

Thank you very much.  First of all, we would like you to tell us how did you begin your participation in the WTF with Dr. Choue?

I have known Dr. Choue for many years, even before he was elected President in 2004.  I had the opportunity to meet him during a trip to Seoul, Korea at the beginning of that year.

During our conversation, he gave me his perspective about taekwondo and he told me about his ideas and dreams on how to promote our sport and martial art. Now, I can say, he has done a lot more of what he expected to do back then.

As you say, Dr. Choue has done a lot more of what he planned at that time.  What is your opinion about Dr. Choue´s work from the beginning of his presidency in 2004 to the present?

Since 2004, the WTF, through its various committees, headed by Dr. Choue, has transformed Taekwondo, from the ancient martial art to a sport that fit in our modern times.

What has been done these past nine years has boosted Taekwondo into the highest summits of sports.

In a previous article published by your respected global media, you recapitulated Dr Choue’s achievements during his leadership.  I would like to cite a few of them:

• The establishment of the WTF-Kyunghee University Partnership Training Program for athletes and coaches.

• The inauguration of the first ever WTF World Taekwondo Poomsae Championships.

• The establishment of the WTF Paralympic Committee

• The introduction of the Taekwondo Peace Corps

• The introduction of the Protector and Scoring System (PSS)

• The establishment and implementation of the WTF Global Athlete License

• The founding of the World Taekwondo Federation Demonstration Team

• The successful lobbying for the inclusion of Taekwondo as a core sport for the 2020 Olympic Games proposed by the IOC Executive Board.

• The Organization of the WTF Poomsae Task Force to develop the future of the Poomsae discipline of WTF Taekwondo.

• The Introduction and implementation of brainstorming sessions between WTF Council Members, MNA Leaders and WTF officials.

• The London 2012 Olympic Games, the most successful Olympic experience of Taekwondo’s history.

Taekwondo has become a globalized sport, spreading from the beginning of a continent to the end of another.

Media coverage of the Taekwondo events has been very important.

Two women have been present in the Supervisory Board during the Olympic Games. Ms. María Borello from Guatemala was in Sydney 2000, Athens 2004 and London 2012, and I was in Beijing 2008.

We must emphasize the fact that four women are part of the WTF Council: Ms. Borello, Ms Garard, Ms Baverel and me.  This is the highest quota for women in martial arts federations.

What do you think about Dr. Choue´s candidacy for reelection?

I believe Dr Choue is the person who should continue leading the WTF. The results that have been achieved until now are nothing but the outcome of the hard work and commitment of individuals who have worked under his guidance.

As Vice-President of the Asian Taekwondo Union, how do you see the support for Dr. Choue´s candidacy in Asia?

Some people may be in favor of Dr Choue’s candidacy and some may not, for different reasons of their own.  However, no one can deny the fact that the president has accomplished a great deal.  The results are obvious and talk for themselves.

I am confident that Asia is aware of his outstanding achievements as president, and they know that he still can give a lot more in benefit of the sport and all taekwondo family.

We have received a lot of support and in return we will continue offering our support.

Mrs. Lahoud, thank you very much for sharing this time with us, do you want to add anything else?

I am proud to have been a Council Member with my colleagues under Dr Choue’s presidency. I congratulate him for the accomplishments carried out and wish him the best of luck in his future endeavors. I also thank masTaekwondo.com to unite the Taekwondo community worldwide. One family … Taekwondo Family.