A large crowd gathered to watch a taekwondo poomsae competition in a stadium normally used for soccer matches, in Tunja, Colombia. The 10,000-strong crowd was something unprecedented for a taekwondo match. This shows the growing popularity of the martial art in the country, and the rest of Latin America as a whole.

They assembled at the Independence Stadium to watch the 7th WTF World Taekwondo Poomsae Championships held in December 2012.

The organizing committee of the event prepared a performance themed with the golden age of the Incan Empire, showcasing the heritage and traditions of Colombia. Some 150 taekwondo trainees boasted various poomsae stances such as blocks, punches, and kicks. 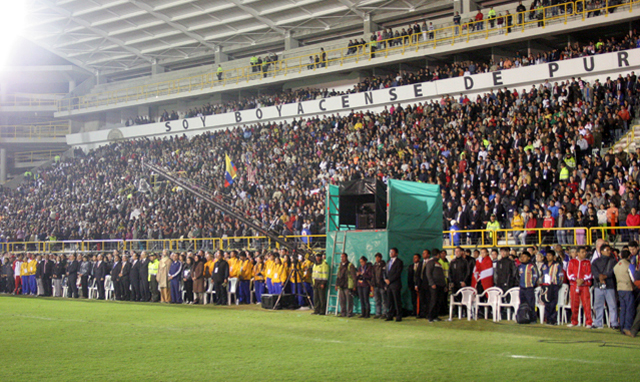 According to the World Taekwondo Federation, the South American country has witnessed a significant growth of interest for the sport since Colombian national team member Oscar Munoz Oviedo won a gold medal at the 2010 Singapore Youth Olympic Games and then a bronze for Colombia at the London 2012 Summer Olympics.

“This event is the first global taekwondo event ever held in Colombia,” said Tunja Mayor Fernando Florez Espinosa in an interview. Espinosa also said the event is a testimony of taekwondo’s popularity. “This sport is the fastest growing sport, not only in Colombia, but also around the world,” he said. 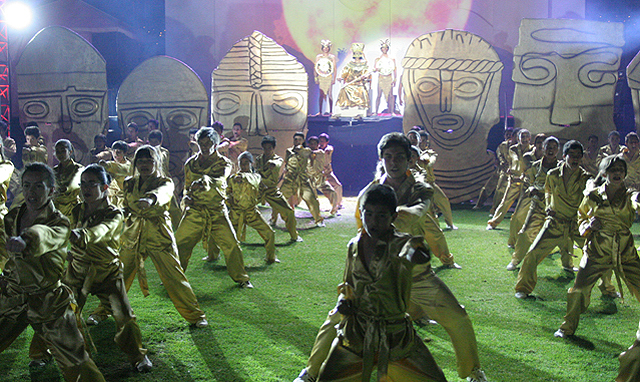 Taekwondo’s popularity is not limited to Colombia. The martial art is becoming one of the most popular sports in Mexico.

Arirang TV, an English broadcaster in Korea, recently aired a program titled Viva Taekwondo, a documentary on the taekwondo boom in Latin America. The program highlighted enthusiasm and heated interest in the martial art in the Central American region.

The program showed children in Puebla, the fourth largest city in Mexico, practicing taekwondo late into the evening, sweating and shouting.

In an interview with Arirang TV, taekwondo master Gabriel Diaz Rodriguez said, “After soccer, taekwondo is the sport most practiced in Mexico.” According to Rodriguez, there are 200 taekwondo schools with 50 students enrolled at each school on average.

In fact, the taekwondo population in Mexico is growing faster than most countries in the world. Mexico entered four athletes in the London 2012 Summer Olympics and earned a bronze.

Moreover, Puebla will be hosting the WTF World Taekwondo Championships this year, adding momentum to the growing popularity of the martial art.

Honduras, located in Central America, is also famous for its love of taekwondo.

President Porfirio Lobo Sosa of Honduras, a renowned taekwondo fan and a third-degree black belt holder, still practices the martial art in the morning before carrying out his presidential duties. He learned taekwondo from the late Song Bong-kyung, a Korean taekwondo master who taught at the Honduran military academy.

Song is known as the father of taekwondo in the country. President Sosa has preached the benefits of taekwondo in his country, for not just physical gains but also mental and emotional advantages from the sport’s focus on discipline.

President Sosa repeatedly said he wants to teach young people in his country the taekwondo spirit and make his country as well developed as Korea.

“I have learned discipline, courage, and perseverance through the teachings of Grandmaster Song and that is why I have a special love for taekwondo and I owe too much to taekwondo,” he said when he visited Korea in February 2011. “I am asking our Honduran youngsters to practice taekwondo as it gives taekwondo practitioners peace of mind, among others.”

According to a report released late last year by Kukkiwon, the World Taekwondo Headquarters, Honduras intended to teach taekwondo at the National Teaching University (UPN), public middle and high schools, and public institutions including the police and armed forces.

Taekwondo started spreading in Latin America in the 1960s after some Korean taekwondo masters immigrated to Paraguay in 1965. They were the first taekwondo pioneers on the continent. Later they became presidential guards and taekwondo began spreading in the country.

Ecuador and Mexico joined the WTF in 1973 when the organization was founded, followed by Brazil in 1975, and Argentina, Colombia, and Venezuela in 1976. As of November 2010, 40 countries in Latin America have joined the WTF.