The elections will be held soon to define the composition of the USAT Board of Directors, where PATU President, Mr. Choi, recently formalized his candidacy. MasTaekwondo.com talked with him in order to have the details. 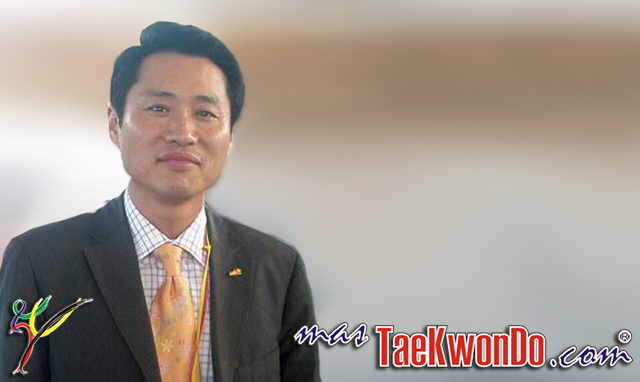 Master Choi, mas.Taekwondo would like to talk to you. Would you give us some minutes of your time?

Hello. How are you? Of course we can talk…

Thank you very much. Recently, we received news about your running for the USAT Board of Directors. What is your objective by doing so?

Well the United States Taekwondo is having many problems and they are in the sight of all. My candidacy basically is born thanks to the requests of many friends. Based on my experience they consider that I could bring positive things for Taekwondo in this country.

When you tell us about your friend´s requests, what do you mean?

Well, they asked me to help in the organization and restructure of the entity. They know my work as president of PATU, and I have previously supported them in many ways.  This time I was asked to help more closely through the Board of Directors, that is, within the organization itself.

As President of PATU, is it necessary to be part of the USAT Board of Directors?

I have done my job for many years in PATU, and I have worked for its development, so I think it is time to share my experience and knowledge with USAT, to help it grow and make U.S Taekwondo one of the strongest in the Pan-American region.

Is there a political reason for which you are running for this position?

No, actually, what I am doing is risking a lot, but my motives are really pure, I want to help. To help USAT to grow, reorganize, so it can be very strong. The United States has more than six million Taekwondo practitioners and it is a pity that the USAT does not have even one percent of this amount as a member.

There are many ways and areas in which they can improve a lot; I really do not know what the result will be. I can only say that if I am elected I will do my best to help them. That is the real reason why I am running for. For my friends and my students.

So this has nothing to do with the presidency of the USAT?

No, no. Look, in the United States there are around ten and fourteen directors of different areas, these people are elected by members of USAT.  There are: coach directors, referee directors, club directors and there are independent directors that are professional people who have nothing to do with Taekwondo, but in a way collaborate with the area directors. There are several ways in which people can become part of the USAT Executive Committee. After the Board of Directors is elected, they are the ones who elect the CEO. Thus this person, who can be called USAT President, becomes an employee.

I know there are many rumors that I could become USAT President, but once I become part the Board of Directors, I cannot be CEO. Regardless of this, I do not want to be the CEO, because I am too busy working for the WTF and PATU.  I don´t have time; I cannot be away from my family. I live in New Jersey and the CEO has to be in Colorado Springs; that makes it impossible for me. It is a misunderstanding that people believe that I will be CEO, that’s not true. I just want to be part of the Board of Directors, where I can guide them, make recommendations, help to restructure the organization and improve its performance in different areas.

What are your plans if you are elected?

Presently, the athlete development is not very good. I think the United States has great athletes, but they are not doing very well in the international circuit. I think this area needs great improvement.  The development of couches could be much better, doing educational and training programs for them so they can be successful in their academies. The referee area is important also, because we need to have top quality referees, with vast knowledge and experience. There are many major championships that need very good referees to generate good athletes, because the referees are one of the keys to get athletes´ development. These are some of my goals, because if these strategies work well, we will have a great sports organization. So I want to help get the United States back to be the powerful taekwondo nation that used to be in the Pan-American area as well as in the WTF.

Changing the subject a little, the X Central American Games is around the corner.  What does PATU expects from them?

Well, the Central American Games have always been complicated; we have had different experiences in these Games with many challenges ahead. This edition will be no different from the others, each organization, each country has its own challenges, as you know, but PATU will be there to provide what is necessary to make these Games a successful event.

We have just had finished coordinating all matters relating to travel for officers and referees. So I am very happy about that. The President of the Costa Rican Taekwondo Federation, Mr. Wilmar Alvarado, requested support with the scoring system and details for the development of the event.  I hope it will be successful, we will work very hard and I hope everything goes well. The entire organization in Costa Rica has been in contact with me and they have collaborated to fill the requirements, so I think everything will be okay.

Thanks for your time Master Choi, do you want to add anything else?

I just want to make clear the reason why I am running for the Board of Directors, and that I have no reason other that the ones I mentioned earlier, which is to serve the U.S. Taekwondo where I live and work, because I think I have a lot to give and contribute.

Master Choi, we wish you success and we will be awaiting the results which will be announced on March 14, 2013.

I would like to thank masTaekwondo.com because as information media is very important for Taekwondo in the Pan American region and for the rest of the world, of course. You have been working hard to be the most important information media in the world, and you made it, so I appreciate your effort. I hope you accomplished all your projects and goals and I also hope that PATU and masTaekwondo.com can work together to promote Taekwondo in the world.