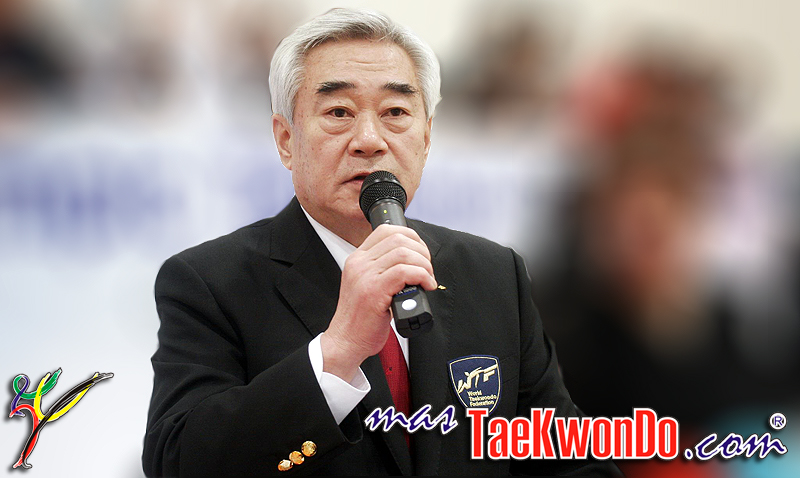 Dr. Choue, thank you very much for letting us expand our previous interview. We appreciate it very much. First, we would like to ask you about your recent meeting with ITF President in Germany, we would like hear our comments about the purpose of such meeting.

First of all, Mr. Chang is a member of the Olympic Family and it is not uncommon for us to see each other at events. We are also both men of taekwondo and have a great passion for the sport and its continued inclusion in the Olympic program. We have discussed this many times when we have run into each other at various events.

It is also important to note that other leaders and members of various ITF and ITF style organizations have reached out to the WTF recently. We all share a love for this sport and they share the same sentiment that Mr. Chang and I share.

It is not uncommon for various leaders of sport to meet and to talk. The success of taekwondo in the London 2012 Olympics was beamed all around the world. It is only natural that they would want their athletes to be able to fulfill their dreams of one day standing on an Olympic podium and there is only one way to the Olympics in taekwondo and that is through the WTF.

Is this meeting related to the inclusion of ITF in the Sportaccord or there is an additional purpose?

The meeting has nothing to do with SportAccord. SportAccord’s statutes state that there is to be only one International Federation to represent a particular sport. Because the applications of several ITF factions go against article 7.A.5., they have not been admitted as a member. I believe that the SportAccord Executive Board and General Assembly have made this decision very clear.

Do you think that ITF interest in unity and integrity is related to the success WTF taekwondo had by obtaining the permanence in the Olympics until 2020? Do you think they want to join our success?

I am very confident that their interests are in their athletes. I believe that this is the common ground that we all stand on. The hopes and dreams of the athletes around the world come first and dreams do not discriminate based on affiliation.

The WTF has an open arm policy toward any athlete that wishes to compete in WTF promoted and sanctioned events and follow our Statutes, Competition Rules, and Code of Ethics.

What do you think would be the reaction of all WTF athletes, coaches, leaders around the world by the possible joining with the ITF? Would they like it or dislike it?

I believe that our athletes, coaches, and leaders are well aware that there are already athletes that are competing in both WTF competitions and ITF style competitions. This is not a big secret. We also have athletes that compete in taekwondo that also compete in karate, wushu, muay thai, mixed martial arts, and various other sports.

The important thing is that all athletes adhere to the WTF statutes, Competition Rules, and Code of Ethics. If the athlete does not, then they will not be able to compete.  This is the same for any sport or organization.

On the other hand, speaking of the changes that are coming for Taekwondo, specifically, the Grand Prix. How would this Series benefit the poor countries? Because some of the third-world countries make an enormous effort to go to the world qualifying tournaments and some others, simply cannot go and use the continental qualifying tournaments.

As we develop the Grand Prix Series, our aim is to be certain that it is fair and provides equal opportunity for all athletes to qualify. That is our objective in qualification in all of our events. Throughout this process we continue to take into consideration how best to assist all athletes. This is all being done thoroughly by the ad hoc committee that has been formed.

Do you think that there will be equal opportunities for all to qualify to the Olympics?

The WTF does all that it can to ensure equal opportunity for athletes to qualify for the Olympics.  This is the reason why we have had so many qualification events starting with the world qualification followed by continental qualification tournaments. The qualification process is continuously reviewed by our technical committees and I am very confident that our athletes’ member nations have a fair process for qualifying for the Olympic Games.

Taekwondo obtained the permanence for the 2020 Olympics. What other projects does the WTF have in order to increase the popularity and credibility in all aspects?

These are incredible legacies that we have established in particularly over the last nine years to leave for generations to come and those legacies have significantly strengthened our role in the Olympic Movement. The IOC Executive Board is recommending the inclusion of Taekwondo as a core sport for the 2020 Olympic Games, but it is up to the IOC Session to make the final decision in Buenos Aires this September. Until then, we must stand steadfastly together for the final decision.

The WTF elections are around the corner.  It is commented that there is a possible candidate who is member of the South Korea Congress.  Are these rumors true?

We have developed into an organization that thrives on democratic ideals and prospers through the values of good governance. It is a sport and a governing body that has welcomed inclusiveness to all of our members through free exchanges of ideas in brainstorming sessions, the hard work of our committees, and the diligence of our Council and General Assembly.

It is only natural for others to want to demonstrate their interest.  As far as I know, the Ad hoc Election Committee has yet to receive any applications for candidature (including mine), but if there is, that is only natural in a fair and democratic process.

It is also said, that you had a meeting with these congressman.  What was the purpose of this meeting?

Yes, we met, but it wasn’t a formal meeting and there was no agenda.  I had lunch with some friends and it was at that lunch that I was introduced to him.

The WTF has big ambitions for Rio and we have already zeroed in on areas that we want to improve.  While we have accomplished so much in the past, there is always room for growth and development.  There are several milestones that we aim for in Rio that include:

For the preparation of all of this, the Rio 2016 Coordination Committee will be appointed and presented to the WTF Council at our Extraordinary Council Meeting held on June 7, 2013 at the IOC Headquarters in Lausanne, Switzerland.

Dr. Choue, mas.Taekwondo.com deeply appreciates the time you have given to this interview. Would you like to add anything else for our readers?

I also would like to commend the efforts of our Member National Associations and our WTF Council Members on the incredible work that they have done in the development of our sport. In the last 9 years we have seen our sport and our organization evolve into something that many people thought it could not become.

We are 204 member nations strong and still growing. We have watched as members reach out to other members to help them with their development that has encouraged a real sense of family amongst us all.

Through these collaborative efforts, through enabling each other to be a part of every aspect of the organizations duties, we have created a true democratic organization that has been striving to excel in good governance. I am very proud of our members and how open and willing they have been to be a part of the process and through this we have been able to overcome many obstacles of our past.

Many people are not aware of how difficult it is to govern an international sport federation, let alone a huge sport like Taekwondo. Our members not only come to Council and General Assembly Meetings to represent their nation and their athletes, but they come together to work for the best interests of our sport. This is not easy and they do it well.

I am confident that we will continue on this path together. For as much as we have accomplished there is still more that we can do. As long as we continue to embrace one another, support one another, and stand with one another, it will be clear that we, the WTF and the sport of Taekwondo is stronger than ever!