In exactly four months, WTF elections will be held and the pre elections climate, calmed in the recent months, has already begun. What seemed to be an undisturbed and peaceful, pre election period due to the fact that the attention was put in the permanence of Taekwondo in the Olympics has suddenly changed.

After the effervescence and agitation caused by the permanence of taekwondo until 2020 Olympics, preparations for the WTF elections that will be held next July in Puebla, Mexico, have begun.

It was initially speculated that after the great work done by Dr. Chungwon Choue, it would be practically impossible to compete against him in the elections; however now all indicates that there will be opposition.

On the other hand, speculation is growing about the meeting held between the WTF President, Dr. Chungwon Choue and his counterpart from the ITF, Mr. Chang Ung. Rumors say that ITF interest in a possible agreement with the WTF is, at first, be part of the Sportaccord World Combat Games, and then take part of the official tournaments.

This meeting took place in Germany during the German Open, and this news was not taken well by many WTF members, as they claim that after so much work and sacrifice to obtain the continuity in the Olympic status, the ITF wants to take advantage of this situation and, if the result would have been negative, Chang Ung had not bothered to approach.

Regarding this information, masTaekwondo.com communicated with WTF Secretary General, Mr. Jean-Marie Ayer and he said: “It is true, there was a meeting, but I cannot not give you the exact issues discussed or ITF President´s true intentions. I understand that the meeting was relaxed and friendly and no relevant agreement was reached. I think the best thing would be to contact Dr. Choue and talk with him about the meeting´s results, as he was the one who was there”.

Following Mr. Ayer´s advice, masTaekwondo.com called up Dr. Chungwon Choue and he kindly accepted to talk with us: 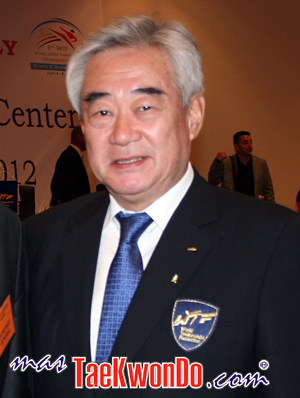 It is a pleasure to talk with you, Dr. Choue. masTaekwondo.com appreciates your attention.

Hello. how can I help you?

Thanks Dr. Choue. We would like to ask you about the meeting you had with ITF President, Mr. Chang Ung.  What was the purpose of the meeting?  Can you tell us your comments?

I cannot tell you the details because the issues discussed are mainly future projects in which we are working and we are still shaping them.  What I can tell you is that it was a pleasant conversation intended to promote a mutual future cooperation.

So, you tell us that there is nothing relevant to inform us about this meeting?

Look, as I said there are future plans but I can give you details until the end of April.

The Grand Prix Series. How do you think this event will benefit countries with less access to events to qualify for the Olympics?

Well, this is an issue pending to be materialized because everything relating to the Grand Prix Series will be completely defined after analyzing it with all members of the Executive Committee in Switzerland next June, so, at the moment, I do not know what the result will be.  But I am convinced and sure that any change we make will increase the popularity and credibility of Taekwondo.

MasTaekwondo.com is present in every important event, so I think that we could talk about this issue in Switzerland. You are all welcome.

We surely hope we can see you there. Before finishing our conversation, Dr. Choue, we would like to ask you about the WTF election process. Elections are around the corner:

Well, we have a lot of work before the elections and I am putting all my efforts to develop and strengthen taekwondo. I do not think it is convenient to talk about elections at this moment. The time will come.

We want to express our appreciation for your time and attention, Dr. Choue. We wish you success in your endeavors.

I want to thank you and all masTaekwondo.com team to work in the promotion and diffusion of our sport around the world.