The Executive Committee of the International Olympic Committee (IOC), was founded in 1921 and is formed by the President, four Vice-Presidents and ten members. We wanted to talk to any of them to learn more about the meeting to be held in Lausanne, Switzerland, next week, where apparently, among other issues, it will be discussed what sport will be left out of the 2020 Olympics.

The permanence of some sports within the Olympics will be decided next week, and curiously, behind closed doors. That is why, masTaekwondo.com spoke with a member of that closed political circle, the IOC Executive Committee, who turns to be the Director of the Ethics Committee of the World Taekwondo Federation, and he kindly agreed to talk with us. 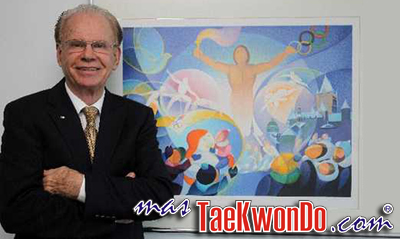 How are you Mr. Kaltschmitt?   Will you give us a few minutes to talk?

We understand that the IOC Executive Committee will hold a meeting in Switzerland next week.  We would like to know what issues will be discussed.

Look, the information we received is that we will discuss issues related to finance, legal, marketing, television rights, ethics, sports for all, the Olympic program, and several things related to NOCs, but I have no exact information on the details.

We have received information that during this meeting it will be decided which sport will be left out of the Olympics in 2020.   What is your personal expectation on this?

Well, that issue will be determined in Buenos Aires.  It is not in the Agenda for this meeting. I can mention to you issues as the candidate cities to host the Youth Olympic Games in 2018, doping or things related to the Olympic Movement.

You mean that this specific issue is not included in the Agenda?

No. We do not have it in the Agenda. There is the possibility that during the meeting the issue can be brought up. But right now we have points to be discussed such as reports from NOCs about summer and winter sports, and other things related to the Olympics.

We have brought up this issue with the intention of knowing the future of Taekwondo in the coming years. From your point of view, do you think that Taekwondo is in risk for 2020 Olympics?

No, I don´t think so, but you never know. But I think there is no risk. Taekwondo has over two hundred member nations affiliated to its governing body. A number of aspects should be evaluated, such as the interest of the sport on television, number of countries involved, the number of sold tickets and the public interest. In fact, in the past 2012 London Games, Taekwondo did it perfectly. My personal point of view is that Taekwondo does not have problems with those requirements. Certainly there are other sports that want to get into the Olympics and so a thorough analysis must be made and then the decision should be taken.

You are an IOC Executive Committee member. But you are also the Director of the WTF Ethics Committee. What do you think of the development of Taekwondo in recent years?

Taekwondo has had an astonishing development recently. As I mentioned before, during the 2012 London Olympic Games we saw the venues complete full of public interested in watching the combats. It is a reality. Taekwondo has met the parameters of the International Olympic Committee. Of course, there are other aspects to be taken into account and to be discussed, but I cannot tell you more information at the moment.

This year is election year for both, the IOC and the WTF, what do you think about the communication between these important sports institutions in the future?

Well, certainly the IOC has clear goals. The change of president should only be detected in the personal way of working, because the goals are already well established. This is not like a change of government in our Latin America countries. When the government changes, everything changes. The IOC is governed by Olympic Charter and it cannot be changed nor altered with the presidency change. On the contrary, a new president will struggle to improve certain aspects. Whoever be elected there will not be a radical change.

Mr. Kaltschmitt, thank you very much for your time and hope your optimism about Taekwondo is reflected in the outcome of the Lausanne meeting, and Taekwondo will stay in the Olympic Cycle. Thanks again.

Your are very welcomed and thank you for the interview.