As the future of the permanence of Taekwondo in the “Olympic Program” is approaching (See: The Olympic Future of Taekwondo: When and how will be determined?), and as masTaekwondo.com, having the commitment to bring all of you first- hand information, even within the most exclusive areas of Taekwondo, we talked to the person that has as his main task to keep our sport within the “Olympic Status”.

The Secretary General of the World Taekwondo Federation, Jean Marie Ayer, whose offices are located in Lausanne, Switzerland, same city where the OIC Executive Committee will hold soon an important meeting which would give Taekwondo continuity or farewell from the Olympic circuit.

The Secretary General of the WTF kindly accepted to be interviewed and told us the following: 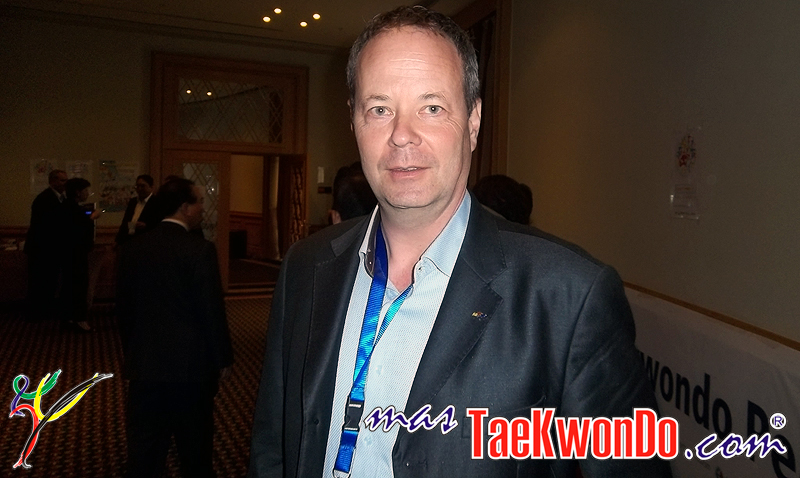 Hello Mr. Ayer I´m talking to you from masTaekwondo.com. Thank you very much for talking with us. May we talk for some minutes?

It is inevitable for all Taekwondo lovers to want to know if our sport will remain as part of the Olympic Games in 2020.  That is why, we also talked with an OIC Executive Committee member (See: Interview with Willi Kaltschmitt, IOC, Executive Committee Member) about what the WTF is expecting from this meeting?

Well, what we really hope is that Taekwondo stays as part of the Olympic sports core program, because it should be like that.

In your opinion, do you think that Taekwondo is in risk for the 2020 Olympics?

What we feel is that the WTF has done everything so Taekwondo continues in the program. All we did, over the last eight years, as well as everything done in London in 2012, has contributed to improve, even more, Taekwondo. This development has taken Taekwondo to the level we see today and become an important sport in the Olympic program, as well. So I think that everything humanly possible has been done. Now we just have to wait the decision, which is purely a politic decision. At this time, we cannot go any further, because now we have to respect the decision that they will take.

So, do you think that there is no possibility that Taekwondo will be left out of the program?

As I said, that it will be a political decision, so we hope it will be positive for us. But with these issues, you never know, we have to wait the final decision until the meeting is over. We know we deserve to be in the Olympics, but we cannot do any more.

Remember that there are 26 sports that are part of this program and as we are waiting to see what happens at the meeting, they should be asking the same question. So we hope that all the work that has been done in the past and what we are doing now will contribute to get the positive answer Taekwondo is expecting.

Is the WTF currently implementing a plan to convince the IOC about the permanence of Taekwondo in 2020?

Well, the decision will be made in a few days, so all the work we have been doing has been a great effort in order to get a positive answer. This is not something that we can do overnight. It is the result of team work done everyday in order to develop and improve Taekwondo. As I said, it will be an OIC Executive Committee´s political decision and we hope they see all the effort and work done.

Mr. Ayer, after a year as Secretary General of the WTF, how do you see the development of the World Taekwondo Federation?

Pretty well; many people have contributed to the development of Taekwondo. Me, as Secretary General, and many others worked to ensure that the Olympic Games last year were successful. From my position, I could see a lot of very professional work. I think the development of Taekwondo has been excellent, the preparation of London Games demonstrated the great work, and, to the eyes of all was a great job done. That´s evidence of all the work behind this organization.

What is your balance after work made?

I think it’s a very positive, with very favorable results.

How do you think the Continental Unions are collaborating with Taekwondo to be well regarded by other international sports entities?

Changing the subject, after the controversy of fake electronic protectors that were recently detected (See: The WTF hunts PSS counterfeiters) what is the WTF doing to eradicate this problem?

As it is well known, to sell official Taekwondo protectors, you must be recognized by the WTF and be authorized to do so. So we want to defend the rights of our recognized companies, so that´s why, we will be very strict in every event sanctioned by the WTF to ensure that all equipment used is dully authorized.

We greatly appreciate your time and willingness to speak to us Mr. Ayer, would you like to add something else?

Well, we are all waiting only for the best. We are very confident that the outcome of meeting will be positive as we expect. We hope that next week we can say to the Taekwondo community that our sport stays in the Olympic program.

You are welcome. Thank you very much and congratulations for the work you have being doing around the world.