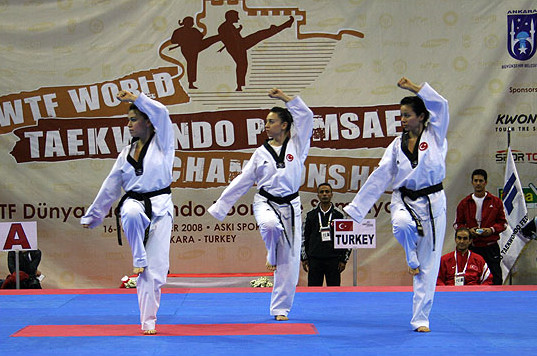 This is what she said to us:

Everybody knows that Turkey is one of the best and strongest teams of the world. How is a normal training day for the Poomsae Turkish team?

“In our Camps we are doing two trainings in a day. Especially during the first training day we use it for stretching. Our training coach has always been my father and as you know he´s nick name here is Mr.Training.”

Why will the Turkish National Poomsae team not be at the World Championships this year?

“As everybody knows the Turkish taekwondo federation is one of the most powerful teams in the world. In last Olympic Games our taekwondo players took gold and silver medals. Therefore, our federation made so many investments for the Olympic Games and now they don’t have money for the next World Poomsae Championships.”

Tell us about your life and career, and why you chose Taekwondo.

“Well, my first dress was a dobok, so I was born this way. My father went to Belgium, Denmark, and lot of places by plane and he used to tell me about his flights to other countries, so I thought he was like some superman because when he used to fly away he would always bring shiny medals and Barbie girls. I was more interested in the medals, though.”

One day I asked him “dad how can I fly like you?

I said, yes, I want to start tomorrow and so I did.

My taekwondo career started in 2008; I took a gold medal in the 3rd taekwondo Poomsae Championships in the female team with Rabia Kim and Ozlem Tumay. I was the youngest taekwondo gold medalist in my country, I was 15. Last year I took gold for the European Championships. I’m almost 20 and I’m still young I have so many dreams I want to accomplish, I want to be a legend like Laura Kim Kim and Kang Su Ji.”

What´s the feeling of father and daughter competing together?

“I get so nervous while my father is in competition. I can’t watch him when he is in show, we are always supporting each other. As you know he is my coach and so I also need him every time in my life. He teaches me Poomsae and techniques. I am so lucky to have a father like him.”

What is the next step for the Turkish National Poomsae team?

“There is a competition in 2013 for our team, I believe that 2013 will be our year. We have new juniors and they are really strong girls. Especially in the next European Championships we are waiting to have more success than last Europeans … As always we want to take gold and we will fight for it. Thank you for your attention MasTaekwondo.” 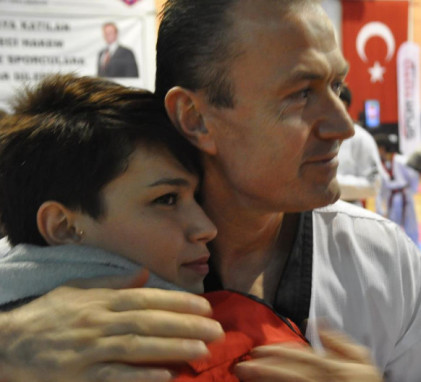