Having as motto “ No day without sport” and “Taekwondo against crime and drug abuse”, more than one thousand young athletes coming from all regions of Ukraine , Russia and Moldova participated in the event. 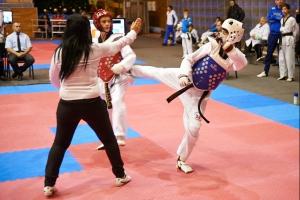 During the opening ceremony, the Deputy Mayor for Family, Youth and Sports Alexander Popov said: “This tournament closes year 2012 – the year of sport, the Euro 2012, the Olympics, the great sporting achievements in Kharkov and Ukraine. I want you to, regardless of the performances at these competitions, begin this coming year 2013, showing the highest possible athletic performance! “,said the deputy mayor to all young athletes.

Alexander Popov noted the high level of Kharkov taekwondo athletes who participated in the tournament who are winners in Europe and in the world. He also said that Taekwondo is one of the most popular martial arts sports in Kharkov, which involve thousands of children.

The opening ceremony was also attended by the President of the Ukraine Taekwondo Federation Mr. Lesyk Samandzhiya.

One thought on ““Children of Ukraine”, taekwondo gathering young athletes”