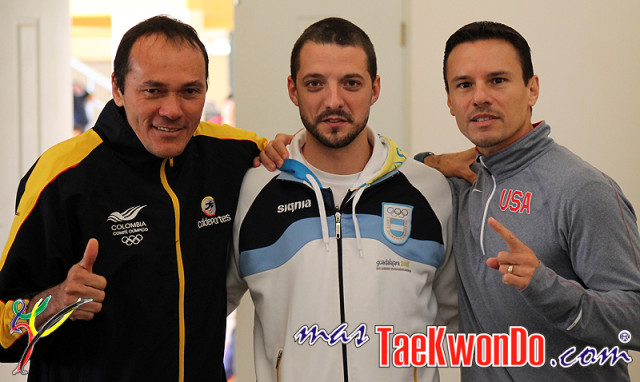 Two of the five coaches, María Espinoza of Mexico and Rosbelis Despaine Sauquet of Cuba (Pedro Gato and Roberto Cárdenas Suárez respectively) were not present in the Pan American Championships in Sucre.

Gabriel Taraburelli of Argentina, Juan Moreno of the United States and Álvaro Vidal of Colombia have undoubtedly been consecrated as the most outstanding Taekwondo Technicals of the American continent, since their athletes obtained medals during the 2012 London Olympic Games.

We had the opportunity to talk with the three technicians, and leaving the Olympic Games in the past, we talked about the recent Pan American Championship and about their team’s performance. This is what they responded:

“The participation of Argentina in the Pan American Championships was very positive, we introduced new competitors who had a very good performance and we also presented part of an experienced group, even though, we did not have the results we expected, we perfomed a high quality of fights against top class representatives and stayed at the same level, losing by the minimum of difference.

The results of the Pan Am tells us that we have done a very good job as a team, both men and women, since we have obtained six medals in total, with a team where new talents began to emerge and I think that gives us confidence to continue working and adding results for our country. “

“The truth is I’m a bit disappointed because we came for the top spot and stayed with the second, very close to Canada. But I’m also happy that we got five medals in five categories male and female, so it really is a very good balance.

Being in London was very special, as we arrived with two very young competitors, who participated for the first time in an Olympic game, and having taken two bronze medals filled me with happiness.

Our next goal is to go to the World Championchip in Aruba, but we are also very focused on the World Championships to be held in Mexico next year. I would like to thank masTaekwondo.com, for it always publishes great information on the global Taekwondo, I visit you two or three times a day, I think that you do an excellent job and I am very happy to meet you. “

“I think it’s the first time that Colombia has this performance, for me it has been very positive, even though we did not have a concentration long enough for this result. This shows that the coaches in the departments are also working and we just have to finalize details here and take them to the maximum of the podium. The Olympic medal gotten by Oscar Muñoz, has filled all athletes of Colombia of such motivation to achieve what you want, and that’s what we have achieved, two gold medals, one silver and five bronze. Thank you very much for the great support masTaekwondo.com has always given us. “