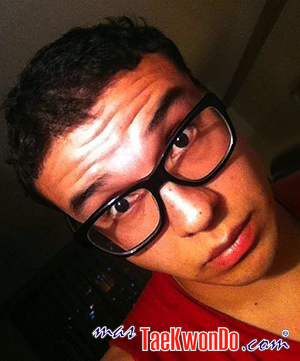 Many years ago, when daylight saving time was almost a novelty, the birds still sang in the afternoon and I still competed in youth, I happened to see a very, very peculiar competitor in a U.S. Open: it turns out that one of my colleagues (Adult) was fighting a guy who always use to have his hand on the back, something like master Roshi when he is thinking and looking towards the horizon. After a few minutes of combat, we realized that this position had a special reason for being: the boy was missing and had that arm dobok sleeve tucked by the back of the belt. In fact, I felt like the worst person in the world and probably i already have a special place in hell after Master Roshi’s joke.

The effort of the boy was so emotional that after his combat, people would applaude(Some even standing) despite losing. I do not remember his nationality, but never I saw something like that in many years.

It was not until 2009 in Baku, Azerbaijan when we got to compete in the World Cup where I turned to find a surprise similar to that day: “1st WTF World Para-Taekwondo Championships “. Indeed it was the first time that electronic Dickies (Does anyone remember LaJust?) were used in an official global event. 30 participating countries and some interesting rules, you can read a short review here:

I never knew if he turned to make a similar event.

The story comes to mind because in recent days the WTF announced (unfortunate acronym which I will never get tired of saying) that is seeking for Taekwondo to debut at the 2020 Paralympic Games. I know, is still a long time ahead, but I would really love to see, not just an event as the Olympics in this mode, but I would also love to see a national, a qualifier, etc … I find it highly interesting and very emotional that Taekwondo starts modifying itself so that everyone can enjoy this wonderful sport, not just watching it on television, but also being part of it in an area of competition and winning medals for their country regardless of their physical condition.

Maybe soon we’ll be talking about new figures in new forms of Taekwondo that perhaps more than one ever thought possible … Hopefully.

“Sport doesn’t care where you’re from, if you’re a man or a woman, tall, thin, big or short. Sport doesn’t care how you got here, how much money you make, what you believe in or not. It doesn’t care if you have two legs, one leg or wheels. Sport only cares that you’re here to take part and give your all to win”