A few days ago masTaekwondo.com in Spanish and English version, published an article entitled: Have PATU elections been suspended in Sucre?, where says that strong versions claimed that the elections scheduled for the General Assembly to be held in PATU Sucre, Bolivia in October, would not be carried out.

This note caused (again) discomfort with PATU Chairman, Ji Ho Choi, whom long time ago has declared against masTaekwondo.com publish information about PATU without confirm information before with him.

Upon learning of his dissatisfaction with the note, we decided to call him and talk to him to know his point of view. 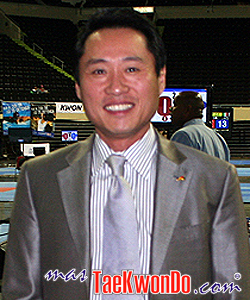 Hello Master Choi, greeting you from masTaekwondo.com do you have a few minutes to talk to us?

Good morning, yes of course we can talk.

The reason of my call today is to clarify information about elections that be held next October in Sucre city, Bolivia. With the purpose of clarify this issue.

You guys continue writing articles without asking me, and the truth is that they are generating a lot of confusion in PATU. You said you wanted to work to strengthen communication, and I can help you, but you have to work with me. If you get information, before write anything, call me and confirm it, but do not publish without consulting me and that’s why I’m not happy with you.

We understand your point and our intention is not to create problems, but is also our work to publish the information coming to us for the knowledge of all.

Yes, you can write what you hear, but when you want to express it, must be based on true facts. If you want to be a respectable journalist web site, you must write true stories, so always consult with me and I will give you the information.

I repeat that we understand your position, but we cannot tell only one side of the story …

It’s just that sometimes you want information that has not been decided, or things that have not been announced yet to our members, and you want to write about that, that is not possible, but general information Yes I can provide you. Always call me to confirm before writing, that’s the best way and the only one in which I will work with you.

You created many problems before and you said you would not do it more, and you did it again now, and that do not make me happy, to be honest, I’m not happy, but you can change your mistake by writing an article saying  that you talked with me and that the election this year still stands. PATU has its own rules, if we have to repeat it next year we will, but PATU must follow its own rules.

Okay, let’s clear this information, so I ask you again just to be clear, Will elections be held this year even if you have to repeat them next year?

Holding elections this year is something that should be decided with PATU Council members before the General Assembly in Bolivia. Council members must decide, it is not my decision. PATU is not managed by me only, if they say okay we will have elections, okay, I respect their decision, if they say they will do next year, that’s fine. Then you will write an article according to the rules of PATU, elections will be held this year.

Okay, just one more thing, the Article 20 paragraph 6 of the WTF Statutes say …

Yes, but you have to understand that I have constant communication with the WTF and they did not give me any indication of this. If we make the election next year, in the statutes of PATU do not say that the president or members begin their term on January 2013, so if the WTF sends me a letter saying they will not accept the election until is performed it in WTF, I would have no problem to postpone elections. That would give me an extra year, but WTF did not do that, the WTF says: you make your own decisions.

From the above it follows that what is written on the Statute of the WTF because of good communication between the president of PATU and the authorities of WTF would be given the green light to the continental authority to do elections at their way, leaving what should be the main rule to follow, to accommodate various interpretations and thus fall into ambiguity or gap in terms of the supplementary application of the continental statutes with WTF Statutes.

We can only wait until the meeting of the Executive Council of the Pan American Taekwondo Union, to knowing what will be the immediate future of the Continental Union.