Less than a month after watching Jade Jones and Lutalo Muhammad contribute to a record Olympic medal tally, GB Taekwondo boss Gary Hall is earmarking talent for Rio 2016 and beyond.

The British National Championships in Manchester gave Hall and his staff a chance to assess the strength in depth of the nation’s taekwondo players, with a record entry of nearly 600.

Hall said: “Every time I come to these championships, the talent at this level is brilliant.

“The challenge is to get more of these talented kids into the cadets, into the juniors and then into the senior squads.” 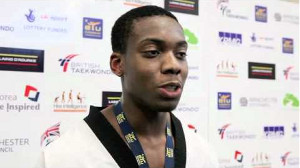 Britain’s Olympians returned to their Manchester training base this week. Hall said:”Significant downtime was needed for all the squad. It was a long four years but it all starts in earnest again now. We will be starting preparation for the French Open in December which is the first major selection tournament for next year’s World Championships.”

Jones and Muhammad will show off their medals at United’s home game against Wigan on Saturday.