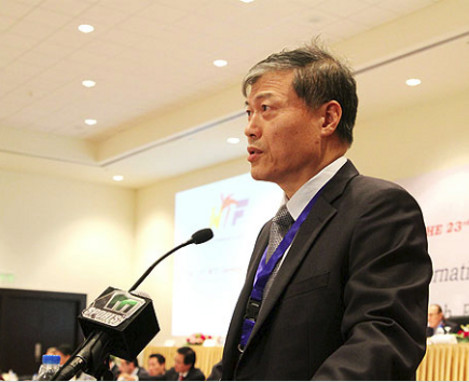 Sithole, the IOC Director of. International Cooperation and Development, sent out a congratulatory message: “I hope Taekwondo that lives and breathes the Olympic Values Education Program keeps contributing to the Olympic movement that unites people wherever they come from.”

Bae Jong-shin, the chairman of Taekwondo Promotion Foundation, said “I hope this will be a meaningful time to discover the value of Taekwondo.”

Ahmed Fouly, the president of African Taekwondo Federation, made opening speech: “The WTF is working hard to spread the Olympic values through taekwondo.”

In session 1. Franjo Prot, a professor of University of Zagreb and president of the Croatian Taekwondo federation, delivered his keynote speech: “Taekwondo has the same value as the Olympics’ and it is important for the coaches, director, teachers and parents to be taught with the values as well.”

Kim Dong-hwan, the Dean of art school of Hanyang University in the panel said “Education and investment are important to achieve the values”

Dr. Russell Ahn from UC Berkeley said “Taekwondo has a very similar value from the Olympics’ such as co-existence, fair play, no discrimination, etc.”

Kim Joong-hun from Yong In University said “As the technology develops and the society is getting unstable, it’s important to raise the young generation with such values. We also need new contents to teach Taekwondo in a safe environment.”

In session 2,. Professor Lee Kyu-hyung from Kye Myung University, presented various cases for personality education through Taekwondo. He highlight the importance of coach’s role that affects their students in many ways.

Adrian Tranter, the Chair of British Taekwondo, showed cases where people turned positive after Taekwondo training and he also pointed out the importance of training coaches for the personality education.

Pimol Srivikorn, president of the Taekwondo Association of Thailand, presented a case where Thai teenagers turned around a leaf for better. Now the person has a higher level of self esteem and control and social ability.

Proffesor Jeong Kuk-hyun from Korea National Sport University said “Taekwondo dojangs should be aware of the responsibility to raise students with higher level of moral character.”