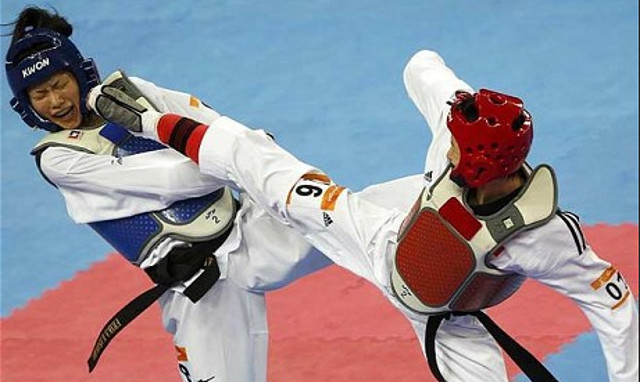 Taiwan‘s taekwondo athletes were adjusting to the weather in London ahead of their scheduled competitions Saturday, with Yang Shu-chun, one of the team’s medal hopefuls, saying it is imperative that they get used to the conditions as quickly as possible.

According to Yang, one of the gold medal favorites in the taekwondo 49kg weight class, “the air is thinner here.”

Another Taiwanese hopeful, Wei Chen-yang, said that he was getting out of breath more quickly while training, as the weather is drier and colder compared with Kaohsiung in southern Taiwan, where he was trained.

Competing in the women’s 49kg weight class, Yang will be in action Aug. 8, as will teammate Wei, who will be battling in the men’s 58kg event.

The third member of the team, Tseng Li-cheng, will be competing in the women’s 57kg weight class Aug. 9.

AP predicted earlier that the final of the women’s 49kg category will be a battle between China‘s Wu Jingyu, who took the gold medal at the 2008 Beijing Olympics, and Yang.

According to a report on Sina.com.cn, the Chinese team has been staying and training at the University of Leeds since late July and have not been practicing at official Olympic venues.

Taiwan has sent 44 athletes to compete in 14 events at the London games. So far, Taiwan has taken one silver medal for women’s weightlifting.