Afghan Taekwondo fighter Rohullah Nikpai won bronze in the men’s under-68-kg category at the 2012 Summer Olympics in London. He lost out to Iran’s Mohammad Bagheri Motamed in the quarter-finals in London but took advantage of a second chance through the repechage.

He beat David Boui of the Central African Republic 14-2 before beating Stamper in the semi-final. The 25-year-old became a national hero after winning Afghanistan’s first ever Olympic medal four years ago. 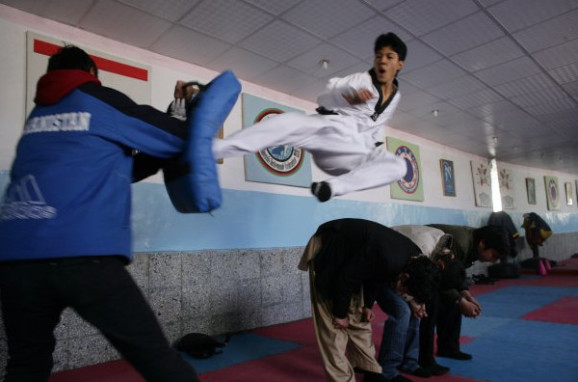 Unlike most Olympic athletes, Nikpah was not groomed from an early age to compete. Rather, he grew up in a refugee camp in Iran, and one day he accompanied his brother to a makeshift gym for a taekwondo sparring session.

The connection was immediate, a little like love at first sight. “I just enjoyed practicing this sport,” he said simply. “We don’t have enough facilities to do the training in our country,” he said, matter-of-factly. “I just use what we have.”

Despite the lack of resources, taekwondo has blossomed in Afghanistan, partly because of Nikpah’s stardom, and also because of the popularity of the sport in neighboring Iran, which has about 4,000 taekwondo gyms. Today in Afghanistan, about 500 clubs are active. Taekwondo is a key way to provide young Afghanis with options outside of the criminal world, said Mirwais Bahawi, acting secretary general of the Afghanistan Taekwondo Foundation.